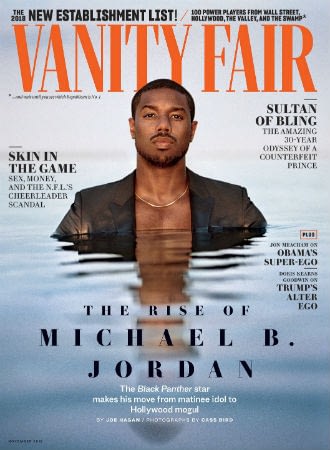 –Michael B. Jordan covers the latest issue of Vanity Fair and talks about how much he has going on right now. His production company (which not only has an inclusion rider pledge but convinced Warner Bros. to adopt that promise across the entire studio)  is already developing scores of television series and films. “I want to create projects for Brad Pitt, but at the same time I want to be able to create a movie for Will Smith, or Denzel, or Lupita, or Tessa. It’s gonna be eclectic. It’s gonna be animation. It’s gonna be non-scripted. It’s gonna be digital. It’s gonna be film, television. It’s gonna be video games.”

-In his calculating new GQ cover story (why is he still getting covers?!?), Johnny Depp plays the victim and says it hurts to be considered a violent man. The whole fawning interview is disgusting and this takedown of it is more worth your time than the story itself.

-Congrats to Kate Hudson and Danny Fujikawa, who welcomed a baby girl. They named her Rani (pronounced Ronnie) after his dad.

–Mischa Barton is going to be on the MTV revival of The Hills and so help me god I’m actually interested. Also, The Hills was a spin off of Laguna Beach, which was originally created to be the real-life version of The OC. Time is a flat circle.

-A very pro-Brad Pitt sounding source says that contrary to reports, he and Angelina Jolie have “no truce” in their custody battle.

-I know I said last week that my enjoyment of A Star Is Born is going to depend on how much I can avoid Bradley Cooper‘s insufferable behavior on this press tour — but I just can’t stop!

–Steven Spielberg has cast Ansel Elgort as Tony in his musical film adaptation of West Side Story. I don’t hate this. You need to be super earnest in that role and that dude is the earnest-est.

–Kanye West took a tour of Detroit’s College for Creative Studies yesterday afternoon, and at one point he jumped on a table to rant about Elon Musk, telling people to “leave that man the f–k alone.”

-Meanwhile, Kanye picked a fight with Kim Kardashian because he didn’t like the colour of the band-aid she gave him, and I actually feel really bad for her. (I don’t know what’s more disturbing: that he seems jealous of the attention she’s giving their kids, or Khloé‘s reaction to her story — “But if that’s going to make him feel more loved, don’t you want to just get the band-aid?”)

-Oh FFS, now Damon Wayans says *he’s* quitting Lethal Weapon. “It’s hard for me to play this loving, supportive father, husband, friend on TV, and be the guy in life that is telling everyone, ‘I can’t I have to work.'” (For what it’s worth, when the Clayne Crawford drama was going down, Wayan didn’t exactly come off smelling like a rose, with reports about him refusing to participate in table reads and wanting sides that only included his lines and excluded the lines of all other actors.) Fox should have just scraped the whole thing and renewed Pitch.

-Fantastic Beasts director David Yates hit back at reports of straightwashing, promising that the sequel will feature Jude Law‘s Dumbledore having “sensual moments” with Grindelwald.

-This is a bad take by Jimmy Kimmel on Louis C.K.‘s return to the comedy stage: “I think people tend to focus on the one or two people who walk out of a situation like that. Ultimately, the audience decides whether someone is welcomed back.” The audience didn’t decide whether CK got that spot on the stage (they didn’t even know he was going to be there). The comedy club owner gave him that spot. To ignore the obvious gatekeeping is a ridiculous statement. (This thread captures everything wrong with what he said.)

-Venom seems like it’s one of those movies that the fresh or rotten rating fails. It’s only 33% on Rotten Tomatoes, but every review I’ve read makes it sound like a mess that’s also super fun to watch.

–Tom Hardy playing with rescue dogs is the best content on the internet today.

-There’s talk that the Timothee Chalamet and Lily-Rose Depp relationship is a PR-based strategy and I refuse to accept this because LOOK HOW ADORABLE THEY ARE!

-This profile on Catherine Hardwicke is a brutal read. The Monday after Twilight opened and she became the highest grossing female director to ever open a movie, she went into the Summit offices to do an online fan chat. “When I went in I saw that there were massive bouquets and balloons and bottles of wine, and crazy gifts sent to them by all the distributors around the world or whoever, all their friends. I had heard these rumors that when a director does something like this they give them a car, they give them a two-picture deal or something like that. They give them an office and ask them what they want to do after this.” Hardwicke pauses. “And then I got a mini cupcake that day.”

-Holy moly, Kristen Bell is on the new episode of Keep It and I’ve never downloaded a podcast quicker. (On a recent episode, Kara put her on her Top Ten White Women list and I really hope they talk about it.)

-I’m still digesting this NYT article questioning whether art should be a battleground for social justice, but it’s worth a read.

-Vulture did a deep dive into Adam Driver‘s oil baron sketch on SNL.

–Rihanna, Yasiel Puig, and Christina Milian were all victimized by the same burglars — three teen boys and the mother of one of the suspects — who were arrested last week. So, does that mean a Bling Ring sequel is in the works?

-Variety reports that ABC Studios and producers have kept Criminal Minds director of photography Greg St. Johns in place despite multiple harassment and abuse claims, an HR probe, and an investigation by a California state agency. Several male crew members accused him of groping them and reported it, but saw no steps taken to curb or address the alleged abuse.

-Another CBS exec has been placed on leave after several current and former employees alleged he regularly used sexual and homophobic language in the workplace.

-This apology/statement by Fan Bingbing does nothing to quell my fears about her well-being.

-So Drew Barrymore‘s publicist has denied she granted that bizarre interview that was circulating yesterday, but Egypt Air is still standing by it.

–Jodie Whittaker takes over the main role on Doctor Who this weekend. I don’t watch the show but I like her so much and she’s uber charming in this interview.