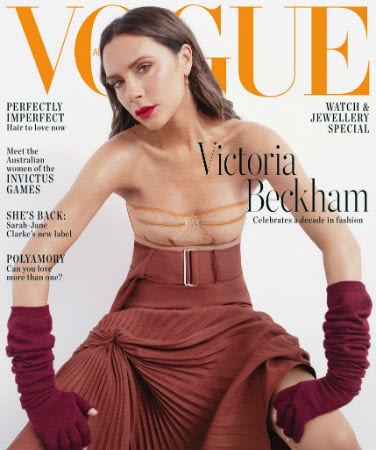 –Victoria Beckham looks amazing in the pages of Vogue Australia (though I’m not sold on the flesh-coloured bandeau). In the interview, she talks about why she doesn’t want to do a Spice Girls reunion (“I always wanted to do fashion, so I was lucky that music was never my main passion. For the other girls it was”) and why she left the group in the first place (“I remember sitting very near to the front [at an Elton John concert] and looking at him singing those songs he’d sung time after time, year after year, and his passion and his enjoyment was incredible, even after all that time. And a few nights later, I was on stage at Madison Square Garden with the Spice Girls and I thought: ‘It’s almost like a waste that I’m given this opportunity. I appreciate the time I’ve had with the girls, but I don’t have what Elton can have after all these years.’ There was nothing there, other than that my kids were in the audience and I wanted them to see Mummy doing the Spice Girls.”).

-This article about how Timothee Chalamet is the perfect movie star for 2018 (according to producers, agents and studio execs) is so, so weird.  There’s lots of talk about how he’s a soft “beta” and not a hard “alpha” like Leonardo DiCaprio by people who clearly forget that Leo was a teen heartthrob for decades (“He’s pretty fey,” says one veteran studio hand and Academy voter in his 60s. “He might be the next Anthony Perkins, rather than the next Leo”).  This part is especially gross: “Girls love him now because I don’t think they’re scared of him…You’re selling the new male. What does the new male movie star look like in a post #MeToo world, where you can’t get away with all the things the alpha guys used to crush it at?” What exactly were you trying to get away with before?!

-Speaking of articles that deal a lot about traditional movie star archetypes, Viggo Mortensen talks about how not becoming famous until he was in his 40s helped him avoid celebrity traps. I have mixed feelings about Green book — I liked it but it’s problematic — but I wouldn’t be surprised if he’s part of the mix when Oscar talk comes around. (Also, I can’t believe he’s going to be 60 in 5 days!)

-I was genuinely surprised by Meghan Markle’s pregnancy announcement. I wonder how Princess Eugenie feels about the fact that they announced it to the family at her wedding?

-Twitter is fantasy casting a movie with Kerry Washington and Chris Evans, and Washington is into it because she’s no fool.

–Jennifer Garner says an Alias reboot may be in the works. Despite my reboot fatigue, I don’t hate this idea.

-Kirsten Dunst and Kristen Scott Thomas have designed sweaters, with proceeds going to their fave charities.

–Nicole Kidman has not one, but two movies that are generating Oscar buzz (Boy Erased and Destroyer) so she’ll be doing quite a bit of press in the next few months. Still, I’m surprised that she talked about Tom Cruise in a new interview while addressing #MeToo: “I got married very young, but it definitely wasn’t power for me — it was protection. I married for love, but being married to an extremely powerful man kept me from being sexually harassed. I would work, but I was still very much cocooned. So when I came out of [the marriage] at 32, 33, it’s almost like I had to grow up.”

-I really like Ariana Grande and I hope she’s doing ok after her split from Pete Davidson. At least it happened before the wedding.

-On a new podcast, Taran Killam got candid about the mood behind the scenes on SNL: “When Seth Meyers left the show, the dynamic changed quite a bit. He was the last person there who I witnessed really collaborate with Lorne, as opposed to just kind of do what Lorne says.”

–Drake comes off really, really well when talking about his drama with Pusha T in Lebron James’ new HBO show The Shop.