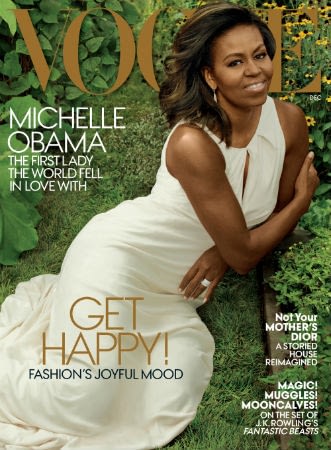 –Michelle Obama looks stunning on the cover of the December issue of Vogue, photographed by Annie Leibovitz. World, let’s make this the No. 1 selling Vogue in history, ok?

-This is a great deep dive into People, the magazine that revealed one of their writers was sexually assaulted by Trump, and has now put him on their new cover. My favourite quote in the feature comes from Lainey: “People appreciates that the minivan majority came out hard for Trump. So they’re doing what they do best: report from inside the assholes of celebrities.”

-Also, in this Twitter thread a People employee defends the cover. The ensuing conversation is interesting.

-Turns out JK Rowling gave her full blessing when it came to casting Johnny Depp, completing this week’s mission to kick us all in the nuts.

–Bella Hadid and The Weeknd have reportedly split. But he’s already used his dramatic post-break up haircut pass!

–The Rock says he might run for president? I love him…but no.

–Bill Cosby fully expects to resume his career once his sexual assault case is over. Of course.

-At least we have Amy Adams and Jimmy Fallon‘s cute singing whisper challenge.

–Shia LaBeouf talked about his new marriage to Mia Goth in a radio interview. And then he freestyle rapped for four straight minutes. The worst part? He didn’t suck.

-On Ellen, Kristen Stewart talked about her exploding fame during the Twilight era.

-There’s a new trailer for Collateral Beauty. God bless Will Smith for putting out yet another mediocre-looking but inoffensive film during the holidays that we can all take our moms to.

-We get a closer look at the Death Star in the new Rogue One trailer.

–Ben Affleck wears a jaunty hat and becomes a gangster in Prohibition era in the Live By Night Trailer.