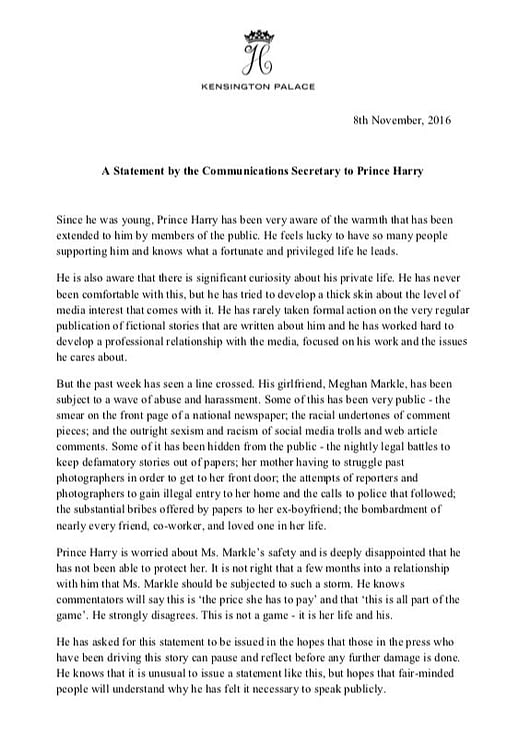 -I’ve read Prince Harry‘s statement so many times today, and it gets better every. single. time. I love it. I love how informal and personal the language is. I love how it details specific incidents of harassment and racism against Meghan Markle and her family. I love that it’s a savage shot across the bow at the UK press, who have been relentless in their treatment — even The Guardian’s coverage has left my jaw on the floor.  (Also, I’ll be talking about the story in tomorrow’s Toronto Star.)

-Wait, Joshua Jackson is American now? But…but… I thought he was still ours!

-Not confusing is Lena Dunham, who did vote for Clinton, thank you very much.

-Early reviews are gushing about Disney’s Moana and even comparing it to The Little Mermaid.

–David Yates confirmed Johnny Depp will play Grindelwald in Fantastic Beasts and the internet has THOUGHTS!

–Angelina Jolie and Brad Pitt have reached a custody agreement over their six children. According to her statement, she’ll get sole custody while he’ll continue “therapeutic visits” which has been “determined by childcare professionals to be in the children’s best interest.” She’s making it seem like this is not temporary, while he seems to be disputing her version.

-I agree with every single point in this article about how to fix Arrow. Stop screwing up my guilty pleasure superhero shows, TV writers!

-The Wilson trailer made me laugh. Between this and Edge of Seventeen, Woody Harrelson is having a big comedy moment.