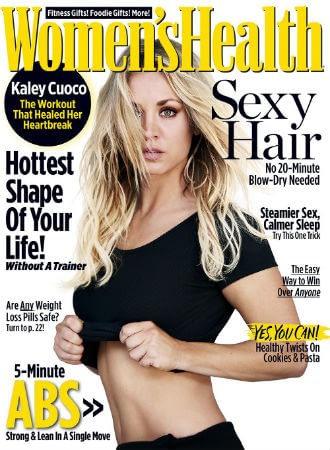 -In a new magazine interview, Kaley Cuoco readily admits that she’s had her nose and breasts done and it’s … weirdly refreshing? That’s where I am with celebrities at this point: pleasantly surprised when they’re not lying their faces off. Sigh.

–Drake‘s crush on sports reporter Doris Burke might be my new favourite thing. “Dinner at my house anytime. As long as she comes alone.”

-Damn, Tom Hiddleston. When you have to dress up in an ape suit to hype your new movie, that’s probably not a good sign.

-Twist! The creator of Gilmore Girls just revealed that Luke was originally written to be a female character.

–Eddie Redmayne says he auditioned for Les Miserables with Taylor Swift and she was “extraordinary.” But not extraordinary enough to get cast, I guess…

–Isla Fisher poked fun of the fact that no one can tell her apart from Amy Adams by pasting Amy’s face over hers on her family holiday card.

-This is a good look at the strange disappearance of Ed, the wonderful charmbomb of a show that time forgot. Now excuse me while I go and rewatch Ed and Carol’s wedding in the finale. *sob*

-I really liked this conversation between Sarah Jessica Parker, Julianna Margulies and Chelsea Handler about girl breakups. I’m not sure I agree with Margulies that women are more emotional than men. I just think that sometimes female friendships run deeper, but we don’t talk about them or analyze them like we do our relationships, so when shit goes sideways it knocks us down hard.

-This article on how TV is entering film territory when it comes to actor (and showrunner) paydays is nuts. Robert De Niro is getting $750,000 per episode for an upcoming Amazon series, while Meryl Streep is scoring $850k per episode of JJ Abrams’ The Nix, which doesn’t even have a network attached yet.

-The international trailer for La La Land has arrived. Also, they released Ryan Gosling and Emma Stone’s duet, which was in my head on repeat for weeks after seeing that movie.

-Oh yeah, The Affair returns this weekend. I really liked last season — and then promptly forgot all about it.

–Jessica Chastain hides people from Nazis in her giant zoo in the new trailer for The Zookeeper’s Wife.