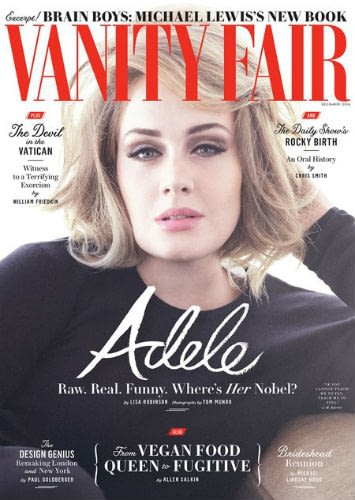 –Adele just delivered a master class in giving a good interview with her Vanity Fair cover story, in which she discussed being friends with Beyonce (“She’s my Michael Jackson”), not always shaving her legs (“I’ll have no man telling me to shave my fuckin’ legs. Shave yours”), and postpartum depression (“I felt very inadequate; I felt like I’d made the worst decision of my life”).

-On the other end of that spectrum is Justin Timberlake‘s new Variety cover story, in which he gushes about how Woody Allen is his hero and says things like “If 20/20 sounded like it literally surrounds your entire head, this [new material] feels more like it just punches you between the eyes.”

-People is going all in on the Prince Harry/Meghan Markle story, reporting that she’s already met Prince Charles and an engagement is “certainly a possibility.”

–Mariah Carey and Nick Cannon reportedly settled their divorce just days before her split from James Packer. Also, there’s new talk that the split may have had something to do with Packer’s Scientology connections.

–Taylor Swift borrowed her Halloween Deadpool costume from Ryan Reynolds because that’s just how she rolls.

-Meanwhile, Beyoncé and Jay Z dressed as Barbie dolls for their latest Halloween costumes, Heidi Klum “cloned” herself, GoT costars Maisie Williams and Sophie Turner went as “hash brownies,” and the New Girl cast dressed up like characters from The People vs OJ Simpson.

-I listen to wayyyy too many podcasts and am always trying to trim my list because there aren’t enough hours in the day, but I’m totally going to listen to one starring Oscar Isaac and Catherine Keener!

-That Cruel Intentions sequel was just dropped by NBC.

-In a new interview with Elle Canada, Miranda Kerr opened up about slipping into an unexpected depression after divorcing Orlando Bloom.

–Justin Theroux insists he was not shading Brad Pitt on Instagram. That’s a shame.

-Whoa whoa whoa. There is a new series inspired by Roswell? And starring the cast of Roswell? I want it now!!

-In honour of this week’s season finale, here’s a roundup of the best moments from Atlanta so far. (Earn freaking out about “market price” at the restaurant gets my vote.)

–James McAvoy‘s rumoured new girlfriend looks like a normal woman, which is refreshing. So much so, that I don’t even want to think about his separation timeline.

-Buffy and UnREAL’s Marti Noxon is going to adapt Dietland for AMC. I loved that book so much I immediately bought my mom a copy.

–Chris Evans fights for custody in the first frailer for Marc Webb’s Gifted.