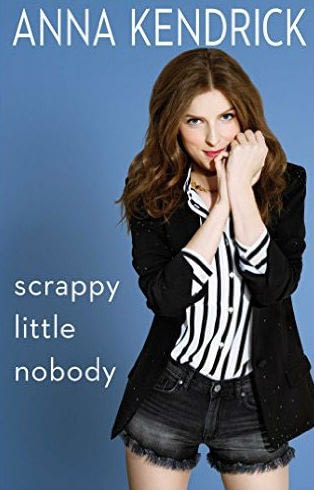 –Anna Kendrick‘s new book Scrappy Little Nobody will be released tomorrow, and I’m really hoping it’s better than this EW preview makes it seem. When she talks about shooting Up In the Air and Twilight, I want to read stories about George Clooney and Robsten, not about nail polish and creepy hotels! Luckily, she promises that she saved “some juice for the payin’ customers.”

-Whatever Ryan Reynolds may be like IRL, at least he knows how to deliver laughs when we all need it. He was named one of GQ’s Men of the Year, and the highlight of the feature is this clip of him get roasted by his bitter “brother” (with Jake Gyllenhaal holding the boom mic).

–John Oliver’s fury is mandatory viewing this week. “Optimism is nice if you can swing it, but you’ve got to be careful. Because it can feed into the normalization of Donald Trump. And he is not normal. He’s abnormal…Keep reminding yourself this is not normal…because a Klan-backed misogynist Internet troll is going to be delivering the next State of the Union address. And that is not normal, it’s f**ked up.”

-Speaking of the normalization of Trump, this is a good look at his 60 Minutes interview.

-Breitbart is reportedly trying to court Billy Bush to be their new Hollywood correspondent. Ugh. They have keep him.

–Emmy Rossum is speaking out about the vile harassment she’s now getting on Twitter because she’s Jewish.

-I get that artists want to grow and stretch, but does anyone really want to hear Taylor Swift attempt hip hop?!

-A judge has ordered Making a Murderer subject Brendan Dassey’s release from prison.

-I saw and loved Arrival this weekend. The fact that  Max Landis is whining about its female protagonist just makes me love it even more.

-My favourite thing about Eddie Redmayne‘s current press tour for Fantastic Beasts is that it mostly involves him talking about big parts he auditioned for and didn’t get. Today’s story: when he tried to play Tom Riddle in Harry Potter.

-I only know Brett Gelman from his Drunk History episodes, but good on him for severing ties with Adult Swim because of their treatment of women.

-As if the world hasn’t suffered enough this month, Chad Michael Murray wrote a romance novel! Based on a dream!

–Drake wears a fur coat and hangs out in a parking lot in the fuzzy video for “Sneakin'”.