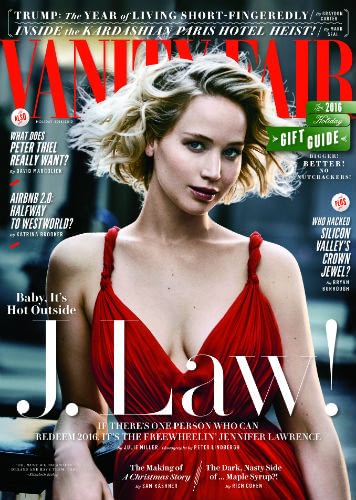 –Jennifer Lawrence continues to expertly straddle the line between relatability and oversharing in her Vanity Fair cover story, revealing that she and Emma Stone texted each other every day for a year, and that her biggest irrational fears are the Zika virus and her privates turning into a “wet sponge.” Kay.

-I go away for a few days and Katy Perry & Orlando Bloom reportedly split? I should vacation more often.

-In THR’s actresses roundtable, Amy Adams rightfully wonders why producers are never asked about the pay gap the way actresses are.

-The Gilmore Girls revival drops tomorrow! (I’m not watching until a viewing party on Saturday, which might be the greatest test of my self-control ever.) Here’s what critics are saying.

–Scott Patterson is teasing the last four words of the series. I don’t know why people care about that so much. (For what it’s worth, I’m guessing it’s the name of Amy Sherman-Palladino‘s production company: Dorothy Parker drank here.)

-Also, Lauren Graham just proved she can speak as fast as Lorelai.

-Meanwhile, everyone is expecting the GG revival to break the internet because it’s so much more popular now then when it first aired. This reminds me of the little punk in front of me at the Luke’s popup a couple of weeks ago who was telling his friend that his mom and sister used to watch the show “live! Like, back in the day, with commercials and everything!” I somehow managed to not throat-punch him. OG fans FTW!

-That Spanish fan who was punched by Justin Bieber is may take legal measures. Of course.

–Leah Remini opened up to Ellen about her battle with Scientology: ‘We’ve been victimized.’ She’s demanding the “church” pay her $1.5 million in damages.

–Jon Hamm is cool with the fact that we all know he has a big penis. Ya don’t say.

–Meghan Markle resurfaced on Twitter to thank her friends for being supportive (one can only assume she means during all the Prince Harry hysteria).

-So Joe Jonas and Sophie Turner really are a thing, huh?

-I’m with Lainey on this one. I see Anne Hathaway kissing Cate Blanchett‘s ass way more than I see her being rude, especially on that particular set…

-It really, really bugs me that Chrissy Metz‘s NBC contract for This is Us says that she has to lose weight.

-I can’t believe Butterball let Stephen Colbert man their turkey hotline, but the results were hilarious. Part 1 and part 2.

–Lin-Manuel Miranda got SLOSHED for his Hamilton retelling on Drunk History.

–Rashida Jones recalled that time she was attacked by Michael Jackson’s chimpanzee.