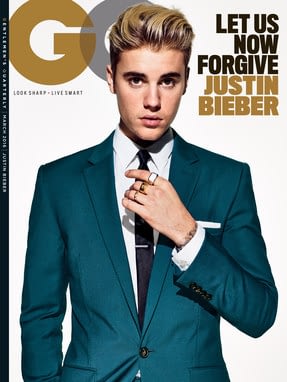 -In his new GQ article, Justin Bieber apologized “you know, to the Mayan people or whatever, whoever was…felt any disrespect.” Super sincere, bro. He also says that now, “I’m a lot closer to my dad than I am to my mom.”

-Meanwhile, Jon Hamm (who looks *rough*), Nick Jonas, Maya Rudolph, John Krasinski and more participate in a dramatic reading of Justin’s “I’m Sorry.” Also, I might have rewound the Kate Beckinsale part to examine her face two or three or nine times…

-Please tell me you’re all glued to the Kanye West live-stream of his album launch! Watching it for the celeb spotting alone is priceless, watching it live with Twitter is next level. I mean, when he debuted his video game footage that featured his mom flying through the gates of heaven(!) and then berated the crowd for not applauding enough! And the new lyrics! “I bet me and Ray J would be friends if we didn’t hit the same bitch.” “I feel like me and Taylor might still have sex, I made that bitch famous.”

-When Meryl Streep was asked about lack of diversity on Berlin film festival jury, she said “We’re all Africans really.” Oh, honey, no.

-Meanwhile in Berlin, George Clooney snapped at reporter how questioned his refugee activism.

-Yesterday, Ryan Reynolds‘ media blitz included a nugget about how he met Blake Lively while they were on a double date with other people. Was her date Leonardo DiCaprio? If so, all of the laughter. All. Of. It.

-Also, Ryan Reynolds can stop with all the promotion. Betty White just did all the Deadpool advertising that needs to be done.

-It is just me, or are behind-the-scene cast videos of CW stars becoming more entertaining than the shows they’re on? Here’s Caity Lotz showing off her epic head-spinning skills, and John Barrowman and Katrina Law doing a dance routine to Paula Abdul.

-Dammit. I dropped Outlander early last season but the new promo art and trailer for the upcoming season is making me want to reconsider. I can’t resist a good corset…

–Jared Padalecki, David Sutcliffe and Milo Ventimiglia just signed on to the Gilmore Girls reboot. Basically at this point, I think we can all assume that every original actor whose name ISN’T Melissa McCarthy will return.

-Speaking of new shows, I can’t really get a handle on the tone of Will Arnett’s new Netflix show from this trailer.

-I’m not the only one totally freaked out by Stephanie‘s boobs in the new Fuller House trailer, right?

-Here’s the final Batman V Superman trailer. Yeah, still couldn’t give a crap about this one.

–Kristen Stewart and Nicholas Hoult are dystopian lovers in the new trailer for Equals.

Wait, Is Taylor Swift in the New X-Men Movie?