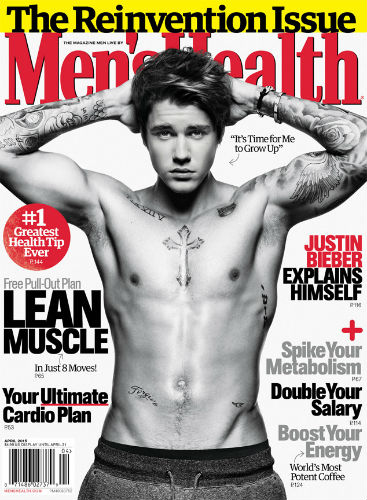 –Justin Bieber got all chesty on the cover of Men’s Health. There’s already a Photoshop controversy about it ’cause fair play.

-Princess perk? Kate Middleton is headed to Downton Abbey to meet the cast and crew.

-Meanwhile, Taylor is taking the ‘don’t photograph me’ thing to Sia levels.

-Romance is dead. Susan Sarandon has dumped her ping-pong boyfriend “following a disagreement over a reality show,” which is how all great love stories usually end.

–Robert Downey Jr. just tweeted the best TBT photo in the history of ever.

-I have no more words to explain Empire’s continued ratings surge. Eight weeks of growth!

–Shia LaBeouf’s tweets continue to make about as much sense as his art.

-Can it be considered a Buffy reunion if Seth Green and Michelle Trachtenberg weren’t actually on Buffy at the same time? Whatevs, I’ll take what I can get.

–Zoe Kravitz faced off against Jimmy Fallon in a giant game of beer pong last night.  It comforts me that even she can’t pull off those shorts.

–Purity Ring crushed it on Late Night with Seth Meyers last night. I just realized they’re Canadian and now I love them even more.

-Also, once Seth Meyers explains a slang word, we must all stop using it. Bye-bye “buh damn.” I hardly used ye.

-Yesterday, Jared Leto tweeted a photo that made him look so young, it could have been taken from his My So-Called Life days. What a difference 24 hours makes.

–Raven Symone and Kim Kardashian also went platinum blonde. What can it all mean, guys?

-The trailer for Dark Places, Gillian Flynn‘s latest book-to-movie adaptation starring Charlize Theron, is here and it’s a nail-biter. (It has French subtitles because it opens in France next month, but is still waiting for a North American release date.)