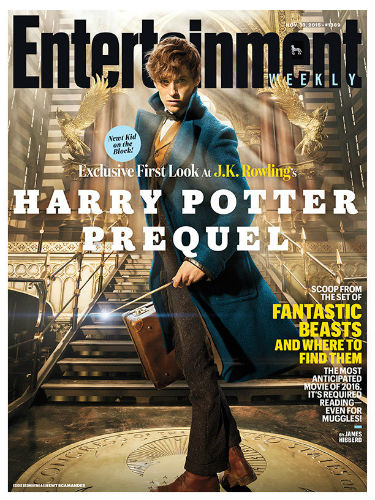 -EW just gave us our first glimpse of the Harry Potter prequel Fantastic Beasts and Where To Find Them.  I have no idea about the plot but I’m totally ready to revisit that world. Plus, Eddie Redmayne looks so adorably rumpled is some of the gallery shots. His bangs alone have sold me.

–Gwen Stefani and Blake Shelton are playing the slow reveal of their relationship masterfully. Kudos, Glake. Or is it Blen? Stefton?

–Angelina Jolie’s Q&A with the NYT is well worth a read. “I’m the first female director that Brad’s ever worked with. That doesn’t seem right when you think about it.” Yup.

-Good on The Daily Beast for calling out the recent slut shaming of Halle. It’s been pretty gross.

–Carrie Brownstein (who is an ordained minister) and Amy Poehler helped two fans get married in an impromptu ceremony. I want to live inside that video.

–Harrison Ford looks so confused by Amy Schumer in this clip from the British Academy Britannia Awards. Someone bake a cake for the camera person who panned to him when she was talking about butt stuff.

-This is insane: The Flash (which is on a teeny tiny network that lots of people don’t get) is out-rating Fox’s entire Tuesday lineup.

-Speaking of The Flash, Jesse L. Martin nicknamed the scenes where he makes us all cry “Joements.” Goddamn, that’s adorable.

-Is it weird that I find Ryan Reynolds his most charming self when he’s swearing at a bunch of little kids?

-The actress who played Anya on Buffy just joined the cast of Supergirl, so I guess that show isn’t leaving my DVR anytime soon.

–George Clooney tries to give Danny Devito suave lessons in his new Nespresso commercial.  I can’t tell if this is cringey or cute?

–This dress on Nicole Kidman is actually hurting my eyes. That thing should come with a pinhole camera so you don’t have to look directly at it.

-The fact that someone at Vulture was actually paid to write Gossip Girl future fanfic makes me really happy — and also really sad that it wasn’t me.

-The best thing about the Room screening at TIFF was Brie Larson‘s adorable interactions with the kid who plays her son. Here, they talk about bonding over Star Wars.

-Ah! A Baby-Sitters Club cast reunion! All the feels!

–Emily Blunt doesn’t look nearly schlubby enough to play the lead in The Girl on the Train adaptation, judging from these set photos. Give us more schlub!

-This isn’t surprising: The Muppets is getting a new showrunner and a reboot.  I’m not watching it but critics seemed to hate last night’s episode more than usual (which is saying something).

-This is an interesting look at how declining TV ratings are going to cost us more money. TV works by people watching ads or subscribing, and ain’t none of us watching ads anymore…

-I never thought I’d see the day where John Krasinski was starring in a Michael Bay actioner, but here we are.