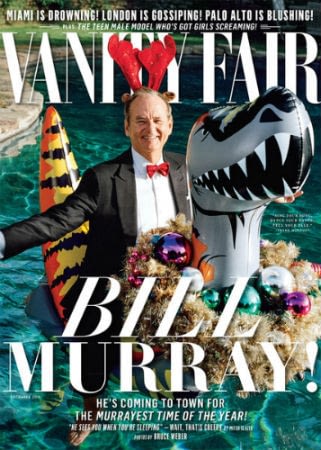 -I can’t wait to devour Bill Murray’s Vanity Fair cover story. (I mean, I’d be even more excited if he combined this interview with a good movie instead of just a Netflix holiday special, but I’m not greedy.)

–Adele looks lovely on the new Rolling Stone cover, in which she talks about her fear of fame and her lack of a squad.

–Brangelina’s By the Sea promo blitz continues with the release of photos of Angelina taken by Brad, a joint interview in which they talk about her cancer scare, and a family trip to a bookstore.

-Meanwhile, Angelina Jolie and Brad Pitt get emotional in the moody new By the Sea trailer.

-I love all of the weird Tom Cruise stories that have leaked from Leah Remini‘s book. He gets super angry when he wants cookies, and he plays adult hide-and-seek. Charming.

-Meanwhile, here’s the first look at Tom and Nicole’s adopted daughter and her new hubby after their secret wedding. One assumes he isn’t an “SP.”

–Halle Berry‘s first ex husband went on a Twitter rant about how she uses men and then tosses them aside. Cool story, bro.

-There’s more rumblings that Fox is eyeing an X Files spinoff starring Robbie Amell and Lauren Ambrose. I love both of those people but how about a brand new, original concept, Hollywood?

-The People’s Choice Awards nominations are out, reminding us all that the people are stupid and shouldn’t be allowed to decide things. The Age of Adaline going up against Straight Out of Compton for dramatic movie? Really?? (I’ll allow The Duff’s nomination in comedic movie, though. I’ll ride for that film forever.)

-Mean, Gwen talked about returning to work after her split: “I wanted to be in my bed, like, crying.”

-Jay Z’s leaked tour rider shows that he really only cares about his daughter, which is super sweet.

–Mark Hamill and John Boyega have joined the campaign to let a terminally ill fan see The Force Awakens early.

–Jimmy Fallon and Bryan Cranston spent a lot of time bumping into each other’s butts during their fake soap opera skit.

–Mindy Kaling once again proves she’s my spirit animal with her spoilers tweet.

-Ugh. I couldn’t even make it through all of the trailer to James Franco’s The Sound and The Fury (or, as Vulture calls it, his latest book report.)

-I love and adore everything about Robot Chicken’s take on CW shows.