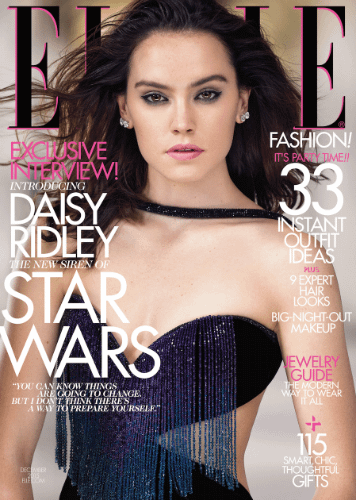 -The new stars of Star Wars are taking over the newsstand, with Daisy Ridley covering Elle, and her and John Boyega both covering THR.

-Oh happy day! It’s a new Jeremy Renner interview! He talks about his favourite curse (it’s the c-word, obvs), and mentions his house-flipping hobby again (of course). I really hope the Hollywood Prospectus guys get their new podcast up and running soon so they can deep-dive this one!

–Reese Witherspoon called out Hollywood sexism and ageism in her speech at Glamour’s Women of the Year event, adding “ambition is not a dirty word.”

–Jon Hamm and Jennifer Westfeldt attended a memorial service for Mike Nichols together in New York, making everyone wonder if they’ve reconciled.

–Azealia Banks is under investigation by the LAPD for allegedly attacking a security guard at a club.

-The final Jessica Jones trailer has arrived ahead of its debut this weekend. Not surprisingly, the first reviews are glowing.

-Speaking of Netflix originals, I binged through most of Master of None over the weekend, and the fourth episode “Indians on TV” was amazing. Read Aziz’s NYT column on race and casting after you watch it. I spent a lot of time thinking about that episode during last night’s screening of The 33, in which French actress Juliette Binoche and Irish actor Gabriel Byrne (unconvincingly) play Chileans.

–Gwyneth Paltrow talked about her divorce at a panel discussion on Sunday. “I am from a tribe of people who stay married…I really don’t come from a culture of divorce at all, and I had very high hopes for what my life could be.”

-This passage from Mary-Louise Parker’s book about being alone and pregnant after Billy Crudup left her for Claire Danes made me tear up a little.

–Shia LaBeouf is making James Franco jealous by watching all his own movies while a camera records him for 72 straight hours. I watched the livestream for a bit, and it was oddly mesmerizing.

-Speaking of James Cordon skits, how did I miss the Jason Derulo car karaoke one?

-I liked this story about Spotlight, a movie about journalism that required the filmmakers to do some investigative reporting to crack the story.

-I really thought I had quit The Walking Dead for good, but then came today’s news that Jeffrey Dean Morgan had been cast. Dammit! That man keeps dragging me back into shows I try to drop. I’m not liking much about this year’s Good Wife (except for the diversity debate),  but I keep tuning in just to watch him *lean*. That man is a Jordan Catalano-level leaner.

–Nick Offerman looks great (even while scarfing down fatty meats with Jimmy Fallon).

-Someone made a supercut of all the Britney Spears scenes in last night’s Jane the Virgin. I thought she did a great job (after I got over the ‘what the heck is going on with her face?!’ distraction). I was convinced that the Britney/Jane dance sequence was split screened, but the showrunner insists it wasn’t.

-The Transparent season 2 trailer finds the fam at a wedding.

–Billy Eichner sent Amy Sedaris through an Shondaland-themed obstacle course. (“Now you’re going to run through this gauntlet of 10 white people patting themselves on the back for embracing a black lead!”)

–Alexis Bledel and Vincent Kartheiser may be expecting. Probably not, though.

-I always liked TV critic Mo Ryan’s stuff at Huffington Post, but the long features she’s been putting out at her new gig at Variety have been stunning. Her latest is on why peak TV has not led to increased opportunities for women and POC directors. She includes links to all her interviews, and the one where she bluntly tells the FX president that he could change things if he really wanted to is worth your time.

-The trailer for the Finding Nemo sequel, Finding Dory, has arrived.