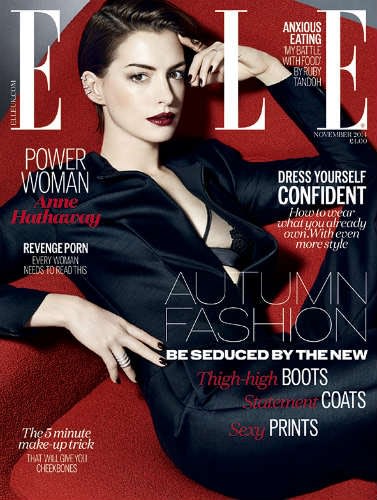 –Anne Hathaway and Adam Shulman revealed they are expecting their first child, which led to a flood of mean tweets from garbage people. Sigh.

-Has it really been 800 days since Tom Cruise has seen Suri? If so, that’s so deeply sad for everyone involved.

-So much superhero TV news hit today. Constantine might join Legends of Tomorrow, CBS may want The Flash to visit Supergirl in May sweeps, and the worst female character on TV might be getting killed off.

-Celebrities ate a lot of turkey yesterday — and Instagrammed every damn second of it.

-Speaking of Thanksgiving-themed grams, Gwyneth Paltrow and Chris Martin spent the holiday together with their extended fam.

-Even Leonardo DiCaprio didn’t hide from cameras during Thanksgiving.

–Kate Hudson continues to win the holidays, though.

-NCIS’s Michael Weatherly (who will always be Logan from Dark Angel to me) was busted for DUI.

–Kit Harington is talking about his chances of becoming the next James Bond. Wait, is that a possibility?! If he gets it before Idris I’m going to flip some tables!

-The Gods of Egypt’s director and studio has apologized for the cast’s sheer whiteness. Too little, too late.

–Rihanna is going on tour — and she’s taking her new boyfriend as her opening act.

-Every promo we get for the new season of Agent Carter is better than the last. My body is ready!