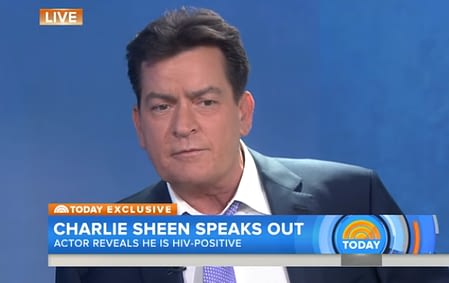 –Charlie Sheen admitted that he’s the person behind all those blind rumours about an actor who’s HIV+. He says he was diagnosed four years ago, and was then extorted for $10 million by people who knew and wanted to be paid for their silence.

-Meanwhile, Sheen‘s ex-wife Brooke Mueller and his twin sons are not HIV-positive, says their rep.

-Following Sheen‘s announcement, Justin Bieber reportedly “requested a dressing room away from” him this morning on The Today Show.

-People offered a sneak peek at their Sexiest Man Alive (which will be announced tonight on Kimmel). Does that look like Will Smith‘s ankle?

-CW’s Seed platform is becoming a thing. Last week they announced they were streaming The OC; now it’s Pushing Daisies.

-Meanwhile, here’s a look at how The Flash has turned the CW into a ratings contender on Tuesdays (TL;DR: every other network’s programming sucks).

-This is a great interview with my Master of None crush Kelvin Yu. I had *no* idea he was the kid in Popular.

-I don’t know anything about the comic book character John Constantine (with the exception of the time he was in an episode of Arrow), but if Matt Ryan can’t play him on the big screen, Colin Farrell seems like the next best choice.

-The trailer for Gods of Egypt, starring Gerard Butler and Nikolaj Coster-Waldau, has landed and it looks like a pile of hot garbage.