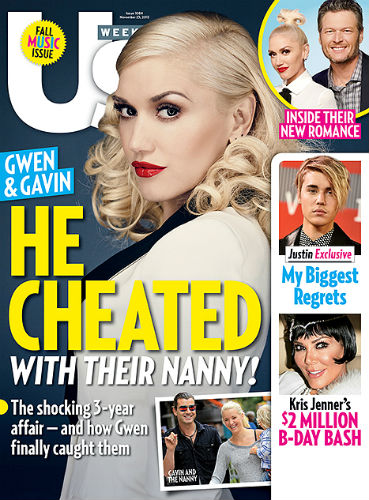 -Us Weekly is coming in hot for Gwen Stefani’s camp with this week’s cover story, which claims Gavin Rossdale was cheating on her with their nanny — and Gwen found out because of an accidental iCloud sync. If only he sent the photos to his entire neighbourhood, this could be the plot of a bad Cameron Diaz movie…

-Is the nanny in question the one Gavin was photographed groping in 2012?

-No, YOU cried over Aziz Anzari‘s note about his dad.

-Meanwhile, Daniel and James McAvoy sported matching buzz cuts at their film premiere. I like everything that’s happening here.

-I’ve given up on Scandal (Olitz is the *worst*), but this is a fascinating read on how the show has quietly turned Olivia into a Walter White-type anti-hero.

–Madonna got to touch Idris Elba. I kind of hate her now.

-It wouldn’t be a Jennifer Lawrence premiere unless she fell down at least once.

–Julia Roberts was “interviewed” by Michael Strahan on GMA this morning (although it was less like being interviewed and more like being gushed at), and she praised Jennifer Lawrence’s pay gap essay.

-In the new issue of Variety, Sandra Bullock talks about the pay gap and how she was treated horribly on a movie set 10 years ago. I’m so curious about what movie it could have been. Infamous? Premonition?

-In more heartening news, Scarlett Johansson banked just much as her male co-stars in the Avengers movies.

-A Snowpiercer TV show is in development? Gimme!

–Jennifer Garner gets emotional in the first trailer for Miracles from Heaven.