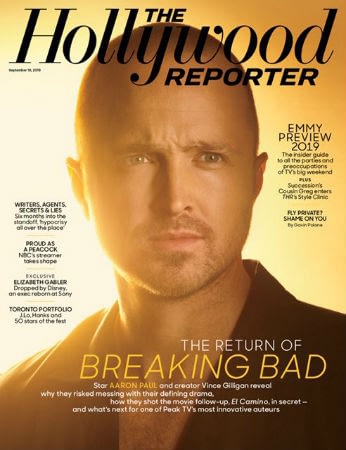 -In the new THR cover story, Aaron Paul explains why he agreed to a Breaking Bad movie despite his fears of messing with the series’ perfect legacy: “I’m like everybody else on the planet — I think Vince [Gilligan] and the rest of the writers really nailed the landing with the ending of Breaking Bad, and why mess with that? But it’s Vince we’re talking about. I would follow Vince into a fire. That’s how much I trust the man. I would do anything that he asked me to.”

–Jennifer Lawrence and Cooke Maroney were spotted at New York City’s marriage bureau on Monday — where they were seen with two security guards, a photographer and another friend — sparking rumours that they got married.

–Kevin Spacey‘s accuser has died in the midst of his sexual assault lawsuit. The late accuser’s lawyer released a statement, slamming Spacey for publicly announcing the death before the family was ready.

-In a Today show interview that ran Wednesday, Celine Dion revealed that she is still mourning her mentor-turned-husband René Angélil, who died in 2016. “I’m very lucky and happy to have so many people in my surrounding to make me — they make me laugh, but I miss to be touched. I miss to be hugged. I missed to be told, ‘You’re beautiful.’ I miss what a boyfriend and I miss what a husband would do.”

–Aaron Carter has fired back after brother Nick took out a restraining order against him: “We’re done for life.”

-The Navy confirmed that the UFO videos posted by the organization founded by Blink 182 rocker Tom DeLonge are real and should not have been released.

–Tekashi 6ix9ine is testifying against two former fellow gang members in a Manhattan federal court trial today, and Snoop Dogg called him a snitch because of it.

-I’m glad that Lizzo recognized that putting a delivery person from Postmates on blast on Twitter to her nearly 1M followers was a dumb and dangerous thing to do. I hate hate hate when famous people sic their followers on service people who are just trying to do their jobs (looking at you, dude from Supernatural).

–Jonathan Scott and Zooey Deschanel got together after they bonded on the set of Carpool Karaoke over their shared love of music.

-If someone told me that an actor confessed he and his wife are swingers in a revealing interview with Playboy, I could never have guessed it’d be the mousey guy from Silicon Valley.

–Britney Spears was granted a new conservator earlier this month and Britney’s mom is already asking a judge to remove her.

-I had no idea that Melanie Lynskey and Jason Ritter were together, but her tweet about his dad, the late great John Ritter, is so so sweet.

-I love how out in the open Joe Manganiello is about his nerdom. I remember listening to a podcast once where he talked extensively about his Dungeons and Dragons expeditions.

-Todd Haynes returns with Dark Waters, a corporate thriller starring Mark Ruffalo as a tenacious attorney who connects a growing number of unexplained deaths to one the world’s largest chemical corporations. Anne Hathaway plays his wife.

Angus T. Jones Begs Us to Not Watch Two and a Half Men. Done!