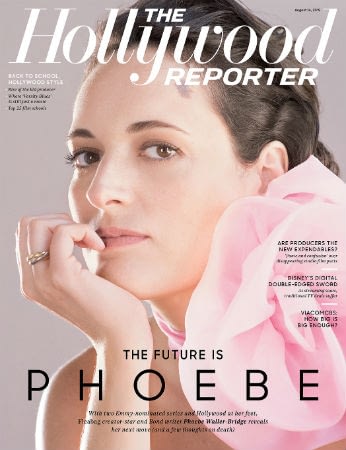 –Phoebe Waller-Bridge is on the cover of THR, talking about her secret new movie (“The day I wrapped ‘Fleabag,’ I went to bed thinking, ‘I’m never going to have another idea again. Oh shit.’ I woke up with the vision of this film”), and being hired to punch up the script for the upcoming Bond film (“A lot has been made of me coming on board because I’m a woman, and that’s wonderful. But also I can’t take credit for the movie that was written. It’s [director] Cary [Joji Fukunaga]’s movie”). Also, I had no idea she’s dating Three Billboards filmmaker Martin McDonagh.

-People mag is quoting a source close to Miley Cyrus who says that there’s a possibility that she might reunite with Liam Hemsworth. “They both agreed it’s better to spend time apart, but this doesn’t mean their relationship is completely over.”

-Here’s photos of Scarlett Johansson and Colin Jost kissing during a beachside stroll in the Hamptons, just in case you were worried that they weren’t living their best lives.

–Gwyneth Paltrow and Brad Falchuk were also spotted on a Hamptons stroll. Is there nothing else to do there?

-Here’s Oprah and Gayle King being quizzed on the meaning of internet slang like “snack” and “thicc.” The fact that Oprah immediately tries to use each word in a sentence as soon as she learns what it mean is precious.

–A$AP Rocky has been found guilty in Sweden but will serve no more jail time.

–This thread about this season of The Handmaid’s Tale pretty much sums up my feelings on it. I gave up halfway through but tuned back in for the finale and though I thought the last episode was effective, it didn’t make up for the meandering season.

-This is Netflix’s next cheesy romcom with possibly the worst title I’ve ever seen and I’m super here for it.

-There was an OC cast reunion at the airport this week.

-This deep dive into Jeremy Renner’s ridiculous Jeep commercials is just what I needed this week.

-We’re getting more info behind Universal’s decision to scrap The Hunt. Apparently execs and the filmmakers received death threats, and the studio’s internal security got involved. It was still a bad call, IMO.

-Forget those rumours that Anna Wintour is leaving Vogue. Not only is she staying, she’s getting a promotion. Anyone else getting some ‘third act of Devil Wears Prada’ maneuvering vibes?

-This clip of Kate McKinnon, who plays Ruth Bader Ginsburg on SNL, meeting her last night is cute.

-This is an interesting look on how Netflix will have to change its strategy soon. Between them refusing to give critics screeners for Mindhunter’s new season, and cancelling Tuca and Bertie (which a lot of people didn’t even know existed, even though it starred Tiffany Haddish and was from the Bojack creators), something’s gotta give. I’ve noticed they’ve started a weekly “what’s new this week” show on social media so things don’t get lost in the shuffle, but the fact that I recently watched the last season of Bojack and the algorithm didn’t even prompt me to watch Tuca and Bertie is a problem.

-2 Dope Queens star Phoebe Robinson just landed her own Comedy Central interview show. I recently went to a screening of Magic Mike XXL that she moderated, and she deserves all the good things.

-Here’s the trailer for Bong Joon-ho’s Palme d’Or winning film, Parasite. I really hope this comes to TIFF. All I’ve heard about it is that you should go in knowing as little as possible because the end will blow your mind.

-Here’s the Last Christmas trailer, directed by Paul Feig and starring Emilia Clarke, Henry Golding and Emma Thompson. Look, I’ve been anxiously awaiting this film since they first announced it, but this trailer has me (and pretty much the entire romance-reading population) thinking he’s going to end up being a ghost or an angel, and I’m not here for that.