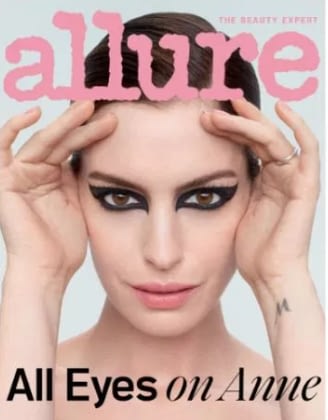 –Anne Hathaway covers Allure, in which she talks about being told to lose weight since she began working (“At 16 years old, it was ‘Congratulations, you have the part. I’m not saying you need to lose weight. I’m just saying don’t gain weight”) and reflects on how roles for women are slowly changing (“It’s more nuanced, and it’s more interesting. It’s allowed for more interesting characters and stories. Now the big question is, are audiences appreciating it? If it’s not supported, it won’t continue. It will go back to the way it was, and people will say, ‘Okay, that didn’t work.'” Also, her video of trying weird things is very cute.

-I can’t tell if Cate Blanchett is being really modest when talking about wanting to retire, or if she’s subtly shading her new movie, Where’d You Go Bernadette. “It’s time for me to stop. Totally. Absolutely. And I’m sure audiences around the world, when they see this film, will say, ‘Oh, yes. It’s definitely time for her to stop.’ I apologize in advance.” And when the interviewer implores Blanchett to continue acting she added “We’ll see what you say when you see this movie.”

-People are really hating on Drake’s Beatles-inspired tattoo. If only they’d hate on his Chris Brown collab half as much.

–Hannah Gadsby says Louis C.K. is “being self-indulgent and he’s being a crybaby.” I love her with my whole heart.

-I only watched two episodes of The Hills reboot before I gave up, but Brody Jenner‘s clearly unhappy marriage bummed me out. But it seems he’s already moved on. Just a week or so after splitting from Kaitlynn Carter (who was then photographed kissing Miley Cyrus), he’s now dating model Josie Canseco. (Or at least, that’s what his camp wants us to believe.)

-Deep fake videos of celebrities always freak me out because they’re so disturbing and the potential uses are gross, but this one that’s making the rounds of Bill Hader turning into Tom Cruise and Seth Rogan *while impersonating them* is beyond freaky.

-The beauty influencer who challenged Priyanka Chopra at BeautyCon talks about going viral and shedding light on the India-Pakistan conflict.

–Jack Black and Jack White teamed up to record a song as Jack Gray. Cute.

-God, I want a One Tree Hill tell-all.

-Yikes, the Disney-Fox merger continues to be rocky. The latest: Disney is reportedly concerned Taika Waititi‘s WWII satire Jojo Rabbit is not on brand. “The scathing take down of Nazism may prove a little too edgy for Disney brass accustomed to producing movies suitable for parents and kids…Halfway through one recent viewing one executive grew audibly uncomfortable, wondering aloud that the material would alienate Disney fans.” Wait, if Disney is afraid of making fun of Nazis, do they think their core fans are…Nazis?

-The first trailer for Greta Gerwig’s Little Women has arrived and holy hell am I all in!

Ariana Grande Lets Her Hair Down