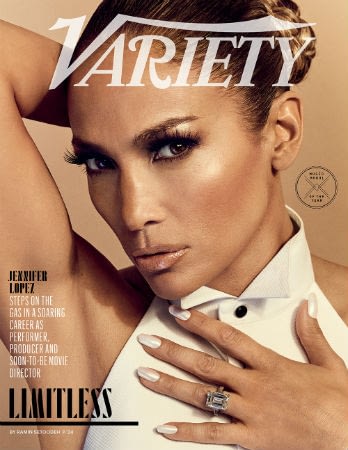 –Jennifer Lopez is on the cover of Variety, in which she talks about American Idol (“Everybody was like, ‘Don’t do this. Your career will be over, and they won’t offer you any movies.’ I was like, ‘The truth is, I’m not getting offered a whole bunch of movies, so what are they not going to offer me?'”), how Alex Rodriguez supports her (“He loves being at every show that he can be at. I go to all his baseball games”), and what she’s like as a boss (“I’m firm. I’m not a yeller or a screamer. I think nobody likes to disappoint me, because I get very quiet. I’m also relentless. I don’t have hours”).

-Also, this is a great clip of JLo talking about accidentally making Constance Wu bleed on the Hustlers set. (I love that Cardi B interrupts her costars with “Wait a minute, actresses!”)

-This is a good Taylor Swift interview (though I’m bummed that the writer describes her Nashville apartment ans “an Etsy fever dream” and there’s no photos).

-This weekend’s D23 Expo dumped a ton of new Disney news, including footage from Star Wars: The Rise of Skywalker (Dark Rey!), our first look at Emma Stone as Cruella de Vil, Black Panther II will come out on May 6, 2022 and Kit Harington has joined the cast of The Eternals.

–Tom Holland addressed the Sony-Marvel split at the event, saying “It’s been a crazy week, but I want you to know I am grateful from the bottom of my heart and I love you 3,000.”

-Some of the most exciting announcements came from Disney+, the new streaming service (launching in Canada for $8.99/month). News of their shows — which will drop weekly instead of all at once — included announcements of a Ms. Marvel, She-Hulk, and Moon Knight live-action series, confirmation that Kat Dennings and Randall Park will reprise their previous MCU roles in WandaVision alongside Kathryn Hahn, news that Hilary Duff reprise her role as Lizzie McGuire, a new High School Musical series is coming, and the reveal that Jeff Goldbum (who I met this weekend and will never stop giggling about) is getting his own show.

-The first round of SNL hosts have been announced. That Phoebe Waller-Bridge / Taylor Swift night should be something else.

-This is a lovely Kirsten Dunst cover story.

-I cannot believe that E!Online ran their annual TV’s Top Leading Man poll and Can Yaman (the guy from the Turkish soap I’m obsessed with) beat out everyone else. I didn’t know so many other people watched it?! I feel so seen!! (Here it is if you want to also be obsessed.)

-This article about a writer who spent several months of my life and over $1,000 on Goop products is worth your time. It goes beyond the surface to examine how Goop uses health anxiety to attract aspirational customers. And it’s really funny.

-A teaser trailer and poster dropped over the weekend for the upcoming Breaking Bad film, dubbed El Camino: A Breaking Bad Movie. It will bow on Netflix Oct. 11, air on AMC later on, and focus on Aaron Paul‘s Jesse Pinkman. “It’s a chapter of Breaking Bad that I didn’t realize that I wanted,” Paul told The NY Times.

–Natalie Portman plays an astronaut who has a tough time re-adjusting when she returns to Earth in Lucy in the Sky, which costars Jon Hamm, Nick Offerman and Dan Stevens.