–Meghan Markle revealed never-before-seen pregnancy pics on Instagram for the launch of her new workwear clothing collection, available at British retailers in the fall. The proceeds will benefit the charity Smart Works, which helps provide clothing and interview coaching to unemployed women. Given how scrutinized and beloved her style is, this is such a great choice. (Plus, we Canadians know it’s not her first time doing a workwear line.)

-After a ton of criticism, Mario Lopez is backtracking on his “ignorant” comments about raising transgender children.

-Jane the Virgin ends tonight and the season finale is getting glowing reviews.

-For J.K. Rowling’s birthday, Emma Watson shared a scary/cute photo of the duo hanging out at a costume party with her co-star Evanna Lynch.

–Celine Dion does not appreciate reports that her close friend Pepe has too much influence over her.

–Lana Del Rey just announced she’s dropping a new album next month (with Jack Antonoff) and I really need it. Also, apparently it’s ok if you’ve fallen behind (like me). The episode explains enough that you can just jump back in.

–Hannah and Tyler haven’t had time to get that drink yet. I don’t really know what any of that means, but my Twitter TL seems *super* psyched about it.

–Angelina Jolie‘s kids are digging the fact that she’s going to be in the Marvel universe.

-I haven’t gotten around to reading this summer’s buzzy book Where the Crawdads Sing (I know, I know) but this Slate article on its dark history is wild.

-Succession is coming back to HBO soon and honestly I can’t wait.

–Ellen Page is bringing a documentary to TIFF called There’s Something In the Water that draws attention to the Indigenous and African Nova Scotian women fighting to protect their communities. She’s a good egg.

-The trailer for Martin Scorsese‘s highly-anticipated (and VERY expensive) Netflix drama The Irishman has arrived, and everyone’s freaked out by the “de-aging” visual effects. 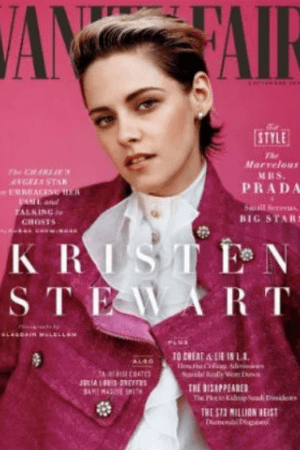 –Kristen Stewart covers Vanity Fair’s September issue, opening up about her career path, her on-again girlfriend Stella Maxwell, her belief in ghosts, and how she eventually recovered from Twilight mania. The video of her going through her film roles is incredibly charming. (I only wish she would have continued talking about Clouds of Sils Maria and explained the ending ’cause I’m still confused.)

–Shawn Mendes and Camila Cabello have taken their summer lovefest to the beach. If this is real, it’s A LOT.

-On What What Happens Live, Andy Cohen pressed Tituss Burgess on his co-star Eddie Murphy being “very problematic for the gays” and the Kimmy Schmidt star did not appreciate it. The actor then posted on Instagram that Cohen can be “a messy queen.”

-Look, the Cats movie is probably going to be a trash but at least it gifted us with this clip of Idris Elba trying to teach Stephen Colbert how to walk like a cat.

-I don’t believe for a second that Bradley Cooper and Jennifer Garner are dating, but they’ve been friends since Alias so I’m actually surprised it took tabloids this long to put them together.

–Lady Gaga‘s rumoured new boyfriend is an audio engineer who worked with her on her Vegas residency.

–Joe Jonas and Sophie Turner got matching tats in honour of their late dog, who was killed last week by a hit and run.

-Man, early buzz for Mindy Kaling‘s Four Weddings And A Funeral adaptation wasn’t great, but the reviews are out now and they’re really, really negative. (Indiewire didn’t hate it, tho!)

–Lil Nas X is getting love from Mariah Carey, whose Billboard record he just surpassed.

-I love that Sarah Michelle Gellar started a meal train for Selma Blair when she got sick.

–Willem Dafoe and Robert Pattinson lose their sanity in The Lighthouse trailer.

-Disney’s box office domination continues as four of its 2019 titles have joined the billion-dollar club and it’s barely August. (Just wait until the new Frozen and Star Wars movies drop.)

-Twelve strangers (including Betty Gilpin, Justin Hartley, Ike Barinholtz and Emma Roberts) wake up in a clearing, not knowing how they got there — or that Hilary Swank now plans to hunt them down for sport in the trailer for the aptly named The Hunt.

–Meghan Markle guest-edited the September issue of British Vogue, which included her interview with Michelle Obama.  Of course, the British press immediately criticized her for it because they won’t let her breath.

-In other royals news, Sarah Ferguson shot down rumors that daughter Princess Eugenie is expecting. “No, she’s not pregnant!”

–Lizzo appeared on NPR’s Tiny Desk concert series, and there isn’t a more joyful video to kick off the week with.

–Shawn Mendes and Camila Cabello continue to be joined at the lip.

-People are wondering if To All The Boys I’ve Loved Before star Lana Condor is engaged thanks to this photo and cryptic caption.

–Brad Pitt has likened the Harvey Weinstein scandal to that of the Charles Manson murders in terms of the way it’s shaken Hollywood.

-I have no desire to see Once Upon a Time…In Hollywood, but goodness has it led to some really well-written reviews. I especially like this one and this one.

-This oral history of Orange Is The New Black includes 23 people and is very, very good.

–Lil Nas X, a gay black man, just made Billboard history and this is why it matters.

-I gotta stop reading articles from the Veronica Mars showrunner. He thinks Veronica would vote Republican?! What?!?

-I don’t watch CBS’s Big Brother, but this sounds like a mess.

–Armie Hammer went viral for all the wrong reasons over the weekend. Gross.

The anti-aging tech they’re doing on Will Smith for the Gemini Man trailers continue to freak me the eff out.