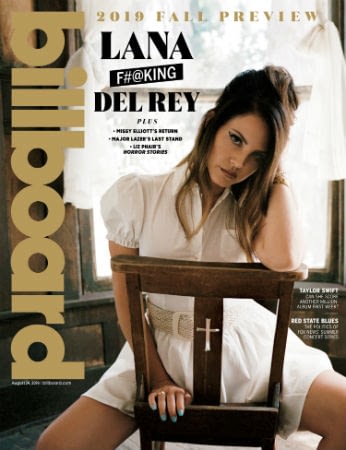 –Lana Del Rey is having a day. She’s on the cover of Billboard and she just dropped her first music video from Norman F—ing Rockwell, featuring two songs.

–Miley Cyrus took to Twitter to deny reports that she cheated on Liam Hemsworth during their marriage. “Once Liam & I reconciled, I meant it, & I was committed…I can admit to a lot of things but I refuse to admit that my marriage ended because of cheating.” I wonder if the part about “at this point I had to make a healthy decision for myself to leave a previous life behind” is a dig at Liam (and a confirmation about rumours that they drifted apart because of his partying)?

-Also in her Twitter thread, she reveals that she was fired from the animated film Hotel Transylavania after photos of her licking a penis cake she got Liam for his birthday hit the internet.

-ET accidentally posted an article before its scheduled release about Shawn Mendes and Camila Cabello getting flirty at their VMAs performance…despite the fact that the award show hasn’t happened yet. Everyone’s pointing to this as proof that their relationship is fake and even though I’m not 100% convinced they’re legit, this doesn’t sway me either way. Do you know how many awards show articles I used to pre-write? Assuming that a couple that delivered a flirty music video will deliver an equally flirty performance of the same song doesn’t seem like a stretch.

–Taylor Swift‘s long-awaited Lover album drops tomorrow, but Missy Elliott might be stealing her thunder by dropping an album tonight.

-Taylor just debuted her new video  a few minutes ago and it’s a big deal (for her) that her love interest in it is black. Also, she’s not only releasing a new album tomorrow, she’s also releasing a capsule collection with Stella McCartney. It looks like shapeless tied-dyed hipster gear to me, so I’m clearly not the target audience. And that oversized sweatshirt seems to be biting Ariana Grande‘s style.

-This thread about all the times Rob Lowe’s sons dragged him on Instagram is a good time.

–Sarah Michelle Gellar is heading back to TV in a Fox dramedy. My body is ready!

-Here’s the first trailer for The L Word’s return. Yeah, Shane can still get it.

-I really liked this article comparing Sean Spicer to Tom, the feckless opportunist on Succession.

-The screws are tightening on Prince Andrew. A new report claims he was seen getting foot massage from young woman at Epstein’s apartment.

-Riverdale’s KJ Apa stars as a Christian rocker in the new trailer for the romantic drama I Still Believe.

-A small-town Oregon teacher (Keri Russell) and her brother (Jesse Plemons), the local sheriff, discover that a young student (Jeremy T. Thomas) is harboring a dangerous secret in the terrifying trailer for Antlers.