–Megan Thee Stallion is the latest celeb to eat wings on Hot Ones.

-On the fourth cover of Rolling Stone’s Musicians on Musicians issue, Lorde and David Byrne talked about stage fright, songwriting mysteries, and unplugging from the online world.

–Madonna‘s daughter Lourdes Leon talked about why she wanted to make her own living. “I feel like if your parents pay for things, then it gives them leverage over you. My mom is such a control freak, and she has controlled me my whole life. I needed to be completely independent from her as soon as I graduated high school.”

-Netflix should be basking in the glow of Squid Game’s success right now. Instead, they’ve just made one wrong turn after another when it comes to the Dave Chappelle mess. The latest: they just fired the organizer of the trans employee walkout. The reason Netflix gave is that they suspect the employee, who is a pregnant Black transgender worker, had leaked metrics about the special to the press. The ex-employee denied leaking info to the media, telling The Verge, “All these white people are going around talking to the press and speaking publicly on Twitter and the only person who gets fired is the Black person who was quiet the entire time.”

-Meanwhile, in an Instagram post comedian Hannah Gadsby criticized Netflix, Chappelle and the streamer’s co-CEO Ted Sarandos for defending him and using Gadsby’s specials as an example of the streamer’s inclusivity. “Now I have to deal with even more of the hate and anger that Dave Chappelle’s fans like to unleash on me every time Dave gets 20 million dollars to process his emotionally stunted partial world view. You didn’t pay me nearly enough to deal with the real world consequences of the hate speech dog whistling you refuse to acknowledge, Ted. Fuck you and your amoral algorithm cult…I do shits with more back bone than you. That’s a joke! I definitely didn’t cross a line because you just told the world there isn’t one.”

–Channing Tatum posted a clip of him dancing on Instagram Stories, saying “Weekend one of exploring and getting back in the saddle. I haven’t danced in years. And dance has moved on so much since then.”

-I keep forgetting/repressing that Phoebe Waller-Bridge is in the new Indiana Jones movie.

–Network TV could stop as soon as next week if IATSE is forced to strike. (And honestly, if their demands aren’t met, they SHOULD strike).

-Disney Plus will release the first two episodes of Hawkeye on November 24, with the remaining four episodes coming out weekly after that.

-I really liked this Vulture piece on Adele‘s new song, “Easy on Me.” “Once or twice per decade Adele comes back tapping on all our pressure points like a veteran acupuncturist.”

–Jodie Turner-Smith and Joshua Jackson continue to be couple goals.

-This interview with the Timothée Chalamet fan who leaked photos of the actor playing a young Willy Wonka is pure gold.

-This is a fascinating read about Crazy Days and Nights. It used to be a fun (if unreliable) gossip read — and then it fell down the QAn*n rabbit hole.

-Tomorrow’s DC Fandome event will debut lots of new trailers, including The Batman. But first, we get a 6-second preview that gives us a glimpse of how Robert Pattinson is handling Batman’s voice. 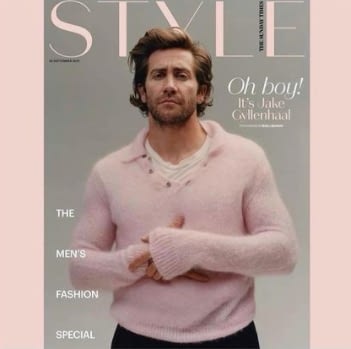 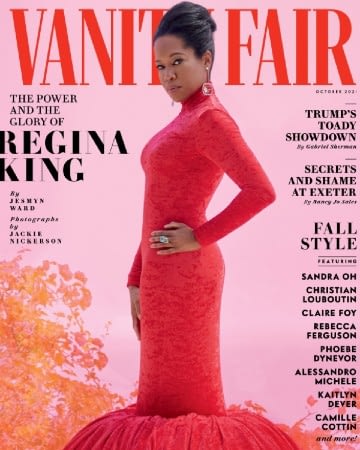 –Regina King graces the October cover of Vanity Fair. I feel like she got robbed of lots of Oscar buzz last year because the awards circuit was so quiet, so I’m hoping she gets to make up for it with The Harder They Fall. (“It won’t be like One Night in Miami….” She pauses, and I hear tears in her voice. “We never got the opportunity to see our film with an audience. I’m grateful to be healthy. I’m grateful that all of our crew and cast are healthy. We got to be in so many different festivals…but we didn’t get a chance to share that, except through this,” she says, indicating the virtual realm. “That was disappointing. But everything is for a reason. I try not to question God’s will.”) Also, this photoshoot is awesome. That gold skirt!!

-In THR’s new cover story, Benedict Cumberbatch discusses staying in character as a meanie while shooting Netflix’s The Power of the Dog. “[Director Jane Campion] introduced me to the crew as Phil and said, ‘You’ll meet Benedict at the end. Benedict’s really nice. Phil is Phil.’ And it just gave me carte blanche to say, ‘No.’ To be Phil, really. To stand in his shoes.”

-Congrats to Jennifer Lawrence and Cooke Maroney, who are expecting their first child.

–Ben Affleck and Jennifer Lopez have arrived in Venice for the premiere of his new movie.

–Jessica Chastain laughed off the hysteria surrounding Oscar Isaac‘s arm kiss. “We have all been locked in our houses for so long. When this video went viral, I was like, people just need to see people touch and hold each other.”

-Gossip Girl got renewed for season two, which is genuinely surprising to me. I felt like the buzz (and any critical admiration) fell off a cliff after the first few episodes.

-The Met Gala is Monday night and there’s still rumours about the guest list. One star who won’t be attending: Zendaya.

-Netflix will be bringing a Bridgerton fan experience to select cities next year. I want it!

-The is an interesting look at how the depiction of suicide on TV is changing.

-I think I would actually love this outfit on pretty much anyone else but Katie Holmes. It’s just not her.

–Rebel Wilson and some of her Pitch Perfect costars reunited to celebrate her birthday.

-TIFF starts today! Here are my picks for the 10 buzziest films, most of which are hitting theatres or streaming very soon.

–Keira Knightley’s dark holiday film, which I’m seeing next week, has already sold at the festival.

-I’m not going to be able to watch any TV for the next week, but it feels like everything is debuting, including Jessica Chastain and Oscar Isaac‘s HBO show Scenes from a Marriage, FX’s long-awaited Y: The Last Man, and the VMAs.

-Speaking of the VMAs, Nicky Minaj just pulled out.

-Aw man. Phoebe Waller-Bridge has left the Mr & Mrs Smith project she was going to do with Donald Glover for Amazon.

-Netflix must have been more impressed with Addison Rae’s performance in He’s All That than critics were; they just signed her to a multi-movie deal.

-Watch Demi Lovato and friends search for UFOs in the trailer for Peacocks’ Unidentified.

-The Princess Diana content keeps flooding in. Netflix released the first trailer for Diana: The Musical, which will premiere in October ahead of the show’s return to Broadway.

–Jason Sudeikis is doing a Ted Lasso-y accent in the South of Heaven trailer while playing a very non-Ted Lasso character, and it’s breaking my brain.

-The Matrix Resurrections dropped its first trailer early Thursday morning. I have no idea what’s happening in it but I’m in!