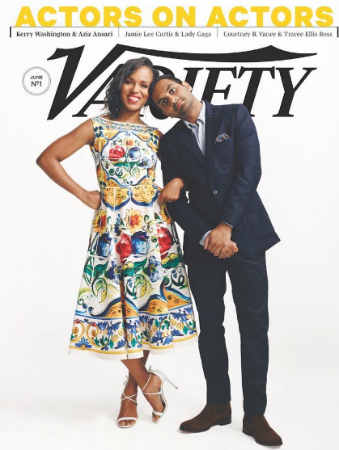 -Variety has released the full videos and/or interviews from their Actors on Actors interviews. I really like the Rami Malek and Kirsten Dunst one, and the Tom Hiddleston and Aaron Paul one.

-Meanwhile, a source says Johnny Depp “never laid a hand” on Amber Heard while he was sober. Wow. Give the man a metal already.

-It was such a smart idea to have the original Ghostbusters cast endorse the new cast on Kimmel last night. Suck it, haters.

-Who the hell is Noah Galvin and why is he calling out my precious Colton Haynes?! (Despite that, this is a refreshingly unrehearsed, take-no-prisoners, non-PR-approved interview. I mean, he comes off as a total asshole who seems completely unhirable, but at least everyone knows his name now, which was probably the point.)

–Leonardo DiCaprio sat with the norms at Beyonce’s concert. He was probably hoping some of them were models.

-The benefit of having a professional wrestler as a costar? If you’re Chris Pratt, it means getting Dave Bautista to teach you how to powerbomb your wife.

–Justin Bieber got into another fistfight after someone slapped him.

-I love this theory about Arya on Game of Thrones (much more than the Fight Club theories that are floating around Twitter).

-That’s not how shipping works, E! News. Doing it with real human beings is gross.

–Kate Mulgrew says she was born with a full set of teeth and her parents kept her in a cage because she had no sense of pain. Ok, then.

-I like this piece on The Americans finale and how we should have known it would rest with Paige.

-There’s an awful lot being written about the future of television these days but this excerpt from Chuck Klosterman’s new book is a standout.

-This interview did nothing to dampen my Daveed Diggs crush.

–Anna Kendrick just wants to be recognized for her hotness at Spike TV’s Guys Choice Awards.

-Strap in; the Rob Lowe roast is coming.

–David Letterman said “I don’t know why they didn’t give my show to a woman” — adding to Stephen Colbert’s very bad week.

-Meanwhile like the rest of us, Colbert can’t believe Bernie Sanders hasn’t dropped out of the race yet.