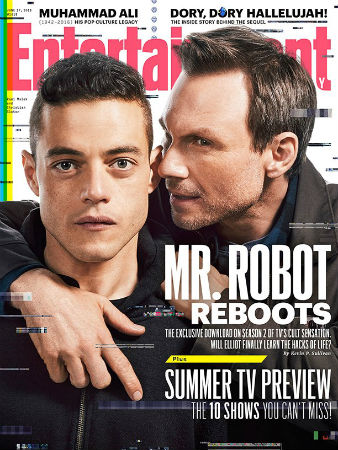 –Robert Downey Jr. visited the Mr Robot season 2 set because he’s Iron Man and he can do whatever the eff he wants.

–Amber Heard has retracted her spousal support request, saying she only asked for it because she thought it was standard operating procedure in a divorce case, and wants to focus on the “very serious real issue of domestic violence.”

–Shia LaBeouf‘s latest are project, #TakeMeAnywhere, has him asking the locals in the Boulder, Colorado area to give him rides to wherever they feel like. Don’t fail us, Coloradans! Deserted locales, abandoned warehouses, deep holes — the choice is yours!

-Not surprisingly, Joel McHale’s sons are awesomely sarcastic. The each demanded $125 to be in his People interview and when one of them was asked what he likes most about his dad, he answered “That he gives us money.” Is it creepy to want to hang with children?

-Speaking of Community stars, Donald Glover is reportedly joining Spider-Man: Homecoming. Not as Spider-Man, but at least he’s getting that Marvel bank somehow.

–Nick Jonas says he once ate a weed lollipop before the Young Hollywood Awards and while he was walking the red carpet, he got a NARB (non-apparent reason boner). I…don’t know why we needed to know that.

-No one wants to play celebrity-based games like they want to play Kim Kardashian’s. Excuse me while I weep for humanity.

-That’s not stopping Kanye West from trying. He’s going ahead with his video game — in which you play his dead mother.

-This Instagram photo of Justin Theroux has me feeling real, real good about the new Leftovers season, guys. Real good.

–Liam Hemsworth (aka – the other one) played slip and flip with Jimmy Fallon — which combines the slip ‘n slide with flip cup. Dear everyone I know: we’re playing this all summer!

–Retta somehow managed to get Michelle Williams to participate in a Snapchat, making her a goddamn American hero.

-Burglars stole $500K worth of stuff from Kevin Hart. Lucky them. If burglars ever hit up my place, the only steal-worthy things they’d find are Alias DVDs and a half-eaten box of Pop Tarts.

-The cast of Misfits is taking over the world and I love it!

-Everything old is new again. There’s another season of Curb Your Enthusiasm in the works. The last episode aired in September 2011, so it’ll be at least 5 years between seasons.

-ATX TV fest organizers spent $10,000 on renovating Panther Field for last week’s Friday Night Lights reunion, which was in such poor condition that NBC’s Revolution filmed one of its apocalyptic scenes there. Worth it.

–Jamie Foxx was spotted in Toronto. Also in TO these days? Katie Holmes. (Sidenote: I just finished reading Movie Star — which is great — but it’s so obviously based on her and I’m awash in pro-Katie feels rn.)

-Oh god. My So-Called Life star Wilson Cruz says his mother’s stepsister was one of the victims in the Orlando shooting.