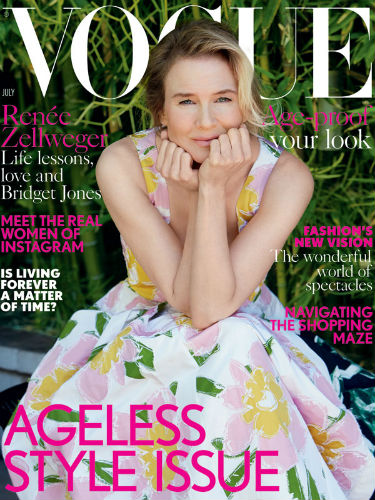 –Renee Zellweger looks lovely on the cover of British Vogue, in which she talks about feeling pressure to put on weight to play Bridget Jones again. “I’ve never understood why it matters so much. No male actor would get such scrutiny if he did the same thing for a role.”  Usually I’d be with her on this, but I think she’s missing the point. A big reason why Bridget was so instantly loved was because she looked like a normal person — and she was instantly relatable *because* she faced scrutiny for that.

–Demi Lovato and Wilmer Valderrama announced the end of their six-year relationship just hours after her great-grandfmother’s funeral.

-THR has an interesting look at how the media frenzy surrounding those leaked Amber Heard photos and texts could anger the judge in court proceedings, regardless of who did the leaking,

-Meanwhile, Amber is suing Doug Stanhope for defamation after he claimed she’s blackmailing Johnny Depp. If successful, she says the money will be donated to a local organisation that supports victims of abuse.

-Get hype: John Boyega will play Idris Elba‘s son in Pacific Rim 2. If Rinko Kikuchi can’t be the lead, I’ll take this instead.

–J.K. Rowling has harsh words for the “bunch of racists” upset with the casting of a black Hermione.

–Maisie Williams awesomely rewrote a sexist Daily Mail headline, while her GoT costar Lena Headey cheered her on.

–Axl Rose is trying to erase the ‘Fat Axl Rose’ meme from the internet (but he can’t erase it from our hearts).

-Why is Taylor Swift getting shit for this online? It’s actually super sweet. People suck.

-Are we surprised that Reese Witherspoon‘s clothing line has a “brunch collection“? Really?

-This is a cute video of Pharrell Williams being blown away by a girl who played her song for him at  NYU’s Clive Davis Institute. (Here’s the song, which I can’t stop listening to. It’s got a Sylvan Esso vibe.)

–Keith Urban‘s expression is perfectly capturing my own confusion about Nicole Kidman’s dress.

–Joanna Lumley just revealed that Ab Fab’s Patsy is transgender. This makes so much sense to me!

-I was getting kind of worried for Chris Evans from all the tweets that were coming out this weekend about him having a panic attack at a fan convention because someone pulled a stunt at his photo opp, but he insists all is well.

–Kim Kardashian doesn’t understand why people still care about her nude Instagram photos. “If you are conservative and that’s how you are comfortable, more power to you. I respect you. You don’t have to look at what I do.”

–Kanye West made a lot of people stay up all night for a surprise show that never happened — and the crowd got a little wild. Meanwhile, Kim promises he’s planning a makeup date.

-Stellar human being John Oliver just surpassed Oprah for the largest TV giveaway ever by buying and forgiving $15m worth of medical debt.

-This Roswell reunion warms my heart.

-Supergirl just put out a casting call for Superman — which seems like a really bad idea.

–Morgan Freeman raised some eyebrows during a panel discussion with his female producing partner on Sunday when he kept talking about how short her dresses are and said things like “Sexist? Yeah. But I’m not misogynistic.” ‘Kay.

-There’s a lot of hand-wringing happening in Hollywood right now about the weak performance of sequels this summer (though I’m not really sure why TMNT 2 is part of that conversation. It was project to make $30-40M this weekend and it made $35M — and hasn’t even opened in China yet, where it really counts.)

-There’s a new horror movie that was shot entirely on Snapchat. End the Earth now.

-I so want to see this doc about a metal band comprised of 13-year-olds.

-I have much less enthusiasm for Kevin Smith‘s latest movie, Yoga Hosers. How many ‘Canadians talk funny’ jokes does one trailer need?