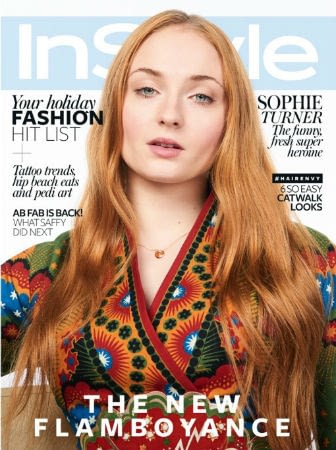 -I hate the styling of the inside photos of Sophie Turner’s InStyle UK photo shoot (why does it look like it was lit with a Bic lighter?), but at least they picked an OK cover photo.

-Speaking of Game of Thrones, the creators say there is only 15 episodes left — at most. Hmm, I wonder if HBO knows that?

–Bradley Cooper has joined the long and cherished tradition of famous white dudes dancing awkwardly at musical festivals. He gets bonus points for the backwards ball cap.

-Despite starring in a blockbuster, Leslie Jones says no one wants to dress her for the Ghostbusters premiere. This is bullshit!

-My friend and I were talking about how we should arrange a girls’ night out on Ghostbusters opening night, just like we all did  for the first Sex and the City movie. Buzzfeed has 11 other suggestions.

–Jesse Williams expanded on his BET Awards speech, saying he wants people to know “they are not alone.”

-Meanwhile, this is a really good take on what was wrong with Justin Timberlake’s tweets about Jesse Williams.

–Leah Remini is reportedly filming footage for a show about how Scientology tears families apart and I want it in my eyeballs now!

–Bobby Cannavale is pretty “down” about Vinyl’s cancellation and needs a hug.

–Tyrese Gibson will return for Transformers 5 — because he begged for it on social media.

-The Daily Show’s abortion tweet was bad. Their apology was worse.

–Samantha Bee‘s segment on Brexit is fabulous. She talks about how the US needs to learn from the UK and dump Trump in a landslide, and then recruits David Tennant to read Scottish Trump insults.