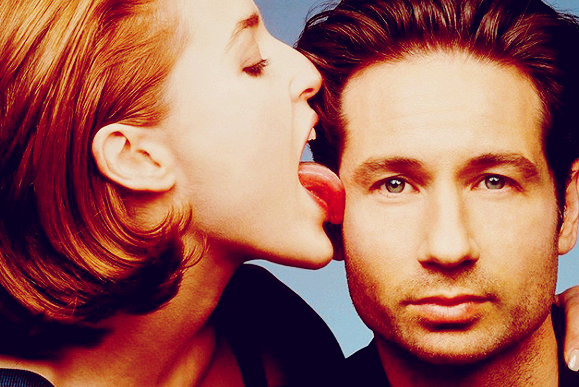 –David Duchovny says the new X Files script made him cry and that a second season may be possible. Hey, Mulder? Let’s just focus on making this season not suck, kthnxbai.

-Bachelorette superfan Amy Schumer appeared on the show last night, where she totally owned a particularly unfunny contestant. “JJ’s a sweetheart. He’s just missing like, charisma and humility and a sense of humour.”

-And now everyone wants Amy to be the next Bachelorette, which would break the internet.

-In Amy’s latest viral sketch, she explains the universe with help from Bill Nye, Amber Tamblyn and the Broad City girls.

–Pharrell, Andrew WK, Moby (who DJ’d for free) and a bunch of other stars threw the fat-shamed “Dancing Man” a dance party he’ll never forget. No, *you’re* crying!

-The first 9 minutes of Roswell star Shiri Appleby‘s new show UnREAL is now online. (It premieres Monday at 10 on Lifetime in Canada.) I missed her face.

–Channing Tatum is trying to convince us Gambit is going to rock but my eyes glazed over as soon as I heard the words “superhero origin story.”

–Lily Collins and Jamie Campbell Bower are back together. But what of Chris Evans? WHAT OF HIM??

–Rachel McAdams looked lovely as her sister’s bridesmaid this weekend.

-#BeyoncéAlwaysOnBeat, an ode to the fact that Beyoncé can dance to any beat, is the best meme of the year so far.

-Although Feminist Mad Max is certainly giving Beyoncé a run for her money.

–Mindy Kaling and B.J. Novak‘s upcoming book is not a tell-all, unfortunately.

–Katy Perry and John Mayer are officially back on…and celebrating their reunion at Disneyland.

-Also back on and going strong: Emma Stone and Andrew Garfield.

–Victor Garber just confirmed that Robbie Amell will be part of Legends of Tomorrow somehow. Seeing how The Flash ended, I’m guessing he’ll be a big part of that show next season, too.

–Interviewing Jeremy Piven sounds exactly as much fun as you think it’d be.

–Rihanna‘s Dior ad, in which she runs through the Palais de Versailles, is now online.

–Shia LaBeouf wants us to watch him act out 36 mini-movies with his new project. Yeah, I need to be much more drunk for this.

–Gwyneth Paltrow and her trainer have started a take-out food company together, and it’s already been described as “weird” and “joyless.” (Not that I’m in the habit of defending GOOP, but I can personally vouch for her frosting shots idea.)

–George Clooney was promoting Tomorowland on The Graham Norton Show, where he once again apologized for Batman.

Nina Dobrev Gets Bendy for Self

Felicity Huffman Is Going To Jail