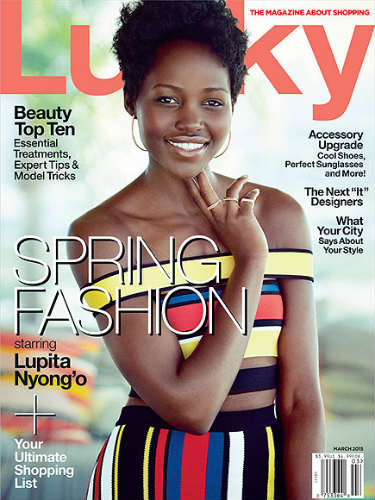 –Lupita Nyong’o looks lovely on the new cover of Lucky, where she talks about how being famous makes it really awkward when using the bathroom at Starbucks.

-God bless Shirley Manson for ripping Kanye West a new one in an open letter. There’s a reason I dressed like her all throughout high school.

-Everyone just needs to lay off Uma Thurman, mmm-kay? Kay.

-Better Call Saul premiered with the best cable ratings ever, which doesn’t really surprise me. It’s second episode dropped 50% but it was still the top cable show of the night, which actually does surprise me. I liked it but it’s so….damn….slow….

-Just when you thought the Bobbi Brown story couldn’t get more tragic, she’s reportedly going to be taken off life support on the third anniversary of her mother’s death.

–Jamie Dornan and Jimmy Fallon read excerpts from Fifty Shades of Grey in goofy accents, which almost made it tolerable. Almost.

-Meanwhile, the first reviews of Fifty Shades are in. The Hollywood Reporter was surprisingly positive, calling Dakota Johnson “captivating” and praising Dornan’s performance, which “quickly grows fascinating in its containment.” Variety calls it “well cast.”  The AP, on the other hand, says “There have been perfume commercials with more depth and story arc.”

-Shameless’s Ian will play the Joker on Gotham and oh god do I have to start watching that crap again?

-I had to get my coworkers to explain why it’s a big deal for Marvel to be including Spider Man in their movies now. Whatever. I just don’t want to see Peter Parker bitten by that damn spider again.

-Vanity Fair got a bunch of celebrities to talk about their love of Serial. Ewan McGregor and Brie Larson‘s enthusiasm is adorable!

–Stephen Amell reached out to a family who lost their baby and man, did this room just get really dusty and filled with people chopping onions?

–Anna Kendrick will be part of a “special performance” at the Oscars.  Yes, please!

-Speaking of Anna, the new Pitch Perfect 2 trailer is all kinds of perfection!