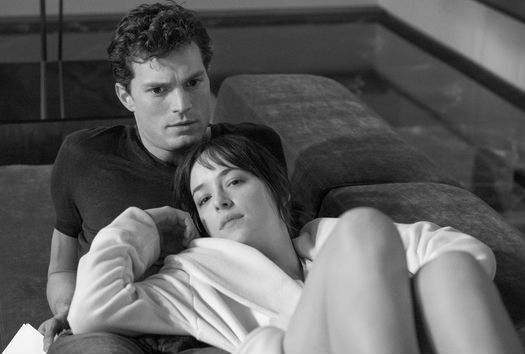 –Dakota Johnson and Jamie Dornan posed in character for W magazine (which basically means she got really naked and he mostly wore jeans), and then Dakota showed Jimmy Fallon how to be sexy on last night’s Tonight Show. I like her shoulder move!

-Meanwhile, Vulture really dug Dakota’s performance in Fifty Shades. Jamie‘s, not so much.

-I don’t watch House of Cards because I think it’s trash masquerading as prestige television (not that I don’t love me some trash, but ya gotta own it), but everyone is FREAKING OUT over the fact that season three suddenly appeared on Netflix weeks before it was supposed to. (At least their social media account handled the leak well.)

-Our long national nightmare is over — Rihanna and Leonardo DiCaprio have reportedly stopped banging.

–Patricia Arquette stands up for Bruce Jenner‘s current journey by speaking about her trans sibling Alexis.

-The new Cinderella trailers heavies up on Cate Blanchett‘s evil stepmother, which is a great idea.

-This is how Jon Stewart broke the news that he’s leaving The Daily Show last night. *sob*

-Meanwhile, I really liked this career retrospective, and these suggestions of who should take over.

-The Academy is rubbing some more salt in Jennifer Aniston‘s wounds by asking her to present an award to people who were actually nominated.

-I’m not entirely caught up, but I can’t say that I agree with EW’s opinion that Parks and Recreation’s final season is under-delivering.

–Anna Kendrick was on Ellen and told a cute story about being awkward with Sam Smith at the Grammys.

-Ugh. Bobbi Kristina Brown‘s case is being treated as a criminal investigation.

-The infamous conscious uncoupling may have happened a year before we thought it did — or at least that’s what Gwyneth Paltrow would have you believe.

–Johnny Depp reportedly decided not to sign a prenup before wedding Amber Heard. She will now have legal rights to half of his stupid hat collection.

-Whoa. Neill Blomkamp’s Alien sequel might be back on!

-I like Agent Carter, but I really really like the lead actress Haley Atwell. She gives good interview, especially when asked about sexism.

-We have to wait until March 1 for a new episode of The Good Wife, but this teaser should hold you over.

-The trailer for Trainwreck, starring and written by Amy Schumer and directed by Judd Apatow, made me laugh out loud at least three times, so that’s a good sign. The cast is insane, but it’s Vanessa Bayer who steals the show in this clip. “Cause you’re on antibiotics or something?!”