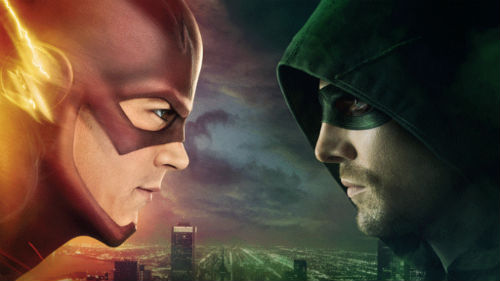 -An Arrow/Flash spinoff is in the works for the CW, and it sounds awesome. It’s like a Super Friends starring both shows most memorable superhero guest stars, including Brandon Routh, Wentworth Miller, Caity Lotz and Victor Garber (I’m assuming Robbie Amell is still in negotiations, since he’s the other half of Garber’s Firestorm). I’m not sure exactly how it’s going to work since one of those actors’ characters recently died.

-Speaking of superhero TV, the Supergirl casting continues to be great — and now really meta. They just cast Dean Cain and Helen Slater.

-I don’t think we need a Blade Runner sequel (especially since the ending on the director’s cut is perfection), but good on Canadian director  Denis Villeneuve for landing the gig.

-Speaking of remakes no one asked for, Blake Lively will star in a remake of At First Sight.

-The new Game of Thrones Season 5 poster is pretty great (and supports the theory that Daenerys will be interacting with characters like Tyrion this season). There’s also some new clips.

-I will never tire of reading an actor’s food diary. Not ever.

–R.I.P. Leonard Nimoy. His appearance in this Bruno Mars video (as well as this Simpsons episode) will make me laugh forever.

-Looking for something to watch this weekend? The Oscar-winning documentary CitizenFour is now streaming online for free. I haven’t seen it yet but my brother gave it two big thumbs up.

-Here’s our first look at Eddie Redmayne as transgender pioneer Lili Elbe in The Danish Girl. So basically, just give him the Oscar now.

–Ryan Phillippe is in a new series called Secrets & Lies, which debuts Sunday (I saw the first episode; it’s surprisingly ok, but Juliette Lewis is horrendously miscast). During the lead up, he’s done a lot of press, including this hilariously gonzo interview with Elle in which he casually mentions that he’s “really involved in helping to liberate a small country.” Uh, ok.

-Here’s our first look at A Royal Night out with Emma Watson.