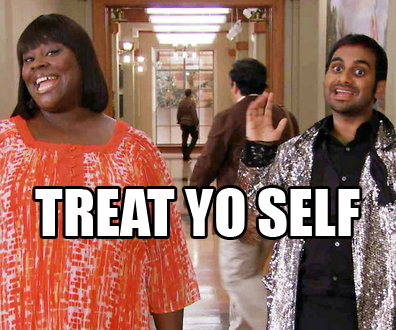 -Parks and Recreation ends tonight and I’m so not ready. No other sitcom in recent memory made me laugh out loud so often, whether it was Chris telling himself to “stop pooping,” Leslie demonstrating the best, most efficient take-down of MRAs ever, the entire gang falling on ice to the tune of “Get On Your Feet,” Ann drunkenly trying to find her straw, or Leslie singing “Everybody pants now. Pants, pants, pants, pants, pants, pants!” Good job, show. I love you and I like you.

-Meanwhile, Amy Poehler spoke to Alan Sepinwall about how the show “kind of ruined me for anything else.”

-The entire Parks and Rec cast will appear on Late Night with Seth Meyers tonight, so at least there’s that. Also, Canadians will be getting the series finale 2 hours earlier than those in the States, which should make us super popular on Twitter.

-Speaking of Late Night with Seth Meyers, Stephen Amell was on last night and did a great job reminding everyone about his Canadian-ness.

-This video of Michael Keaton quickly hiding his Oscars speech after Eddie Redmayne’s win will break your heart.

–Emma Watson sent a sweet note to Steve Carell to compliment him on his Oscar fashion.

–Joshua Jackson and Diane Kruger proved they’re still the cutest at the Vanity Fair after-part. God,  I love them. If they ever break up, please don’t tell me.

-There was an impromptu Gossip Girl reunion at Elton John’s Oscar party.

-Sure, these “random” singers were clearly chosen ahead of time, but Christina Aguilera still killed it when she had to impersonate Britney Spears and Cher on The Tonight Show. Not surprising; remember the amazing impression of Kim Catrall she did on SNL?

–John Travolta‘s explanation of the Idina Menzel flub makes even less sense than the flub.

–Jude Law says he once turned down the role of Superman because he didn’t want to ruin his children’s lives.

–Chris Brown has been denied entry into Canada because we’re good like that. (He deleted all of his tweets about it.)

-Here’s the first trailer for Sean Penn‘s The Gunman.