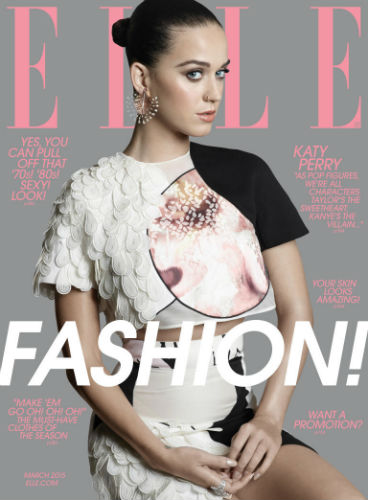 -In her new cover story with Elle, Katy Perry manages to complain about the media’s soap opera construction of pop stars fighting with each other — while simultaneously shading Taylor Swift. “Taylor’s the sweetheart. Kanye’s the villain. That’s the narrative.” SLOW. CLAP.

–Jeremy Renner’s divorce is getting sticky. His ex wants primary custody of their daughter and his claiming his house is unsafe because of his gun collection.

–Ellen Barkin is reportedly dating a British barrister she met at George & Amal Clooney‘s wedding (though they’re not engaged, despite reports).

-This video of Stephen Amell chatting with the cast of The Duff combines so many of my favourite people! (The part where Mae Whitman accidentally lets it slip that her Parenthood character named the baby Zeke and Amell starts tearing up over it is priceless.)

-Speaking of Parenthood, Scott Porter is expecting his first child but I’m just going to go ahead and keep pretending that he’s living his happily ever after with Amber Braverman.

–Jimmy Fallon and Ellen DeGeneres teamed up against Reese Witherspoon and Steve Carell for a game of Password last night.

-I’ve been doing weight training and feeling pretty kick ass about myself, and then Jamie Dornan posted this pic of himself doing a full-body lift and now I need to weep gently in a corner while bingeing on ice cream.

-It’s hard to judge a movie based on clips, but this one and this one from 50 Shades are super uncomfortable. Also, is it just me or does his accent keep slipping?

-Meanwhile, Gawker has a great recap of 50 Shades’ disastrous press tour. The last 45 seconds of that Glamour video was particularly cringe-inducing.

–Jamie Bell created a short film for Vanity Fair in which he gets pretty much every famous British actor to recreate iconic movie scenes.

-AMC has released the first two minutes from The Walking Dead premiere.

-Speaking of TV, I really liked this article delving into how Shameless built one of the most wonderfully unique gay relationships to ever grace the small screen.

-Desperate Housewives creator Marc Cherry is developing a show for the CW called Cheerleader Death Squad, which sounds like the most CWish show that ever existed.

-The first Magic Mike XXL trailer has landed and I LOVE it. If the whole movie consisted just of the Flashdance-inspired bit at the beginning with Channing Tatum busting out in the welding shop, I’d be happy. It reminds me of his routine at the beginning of Step Up 2, which I rewatch *a lot.*