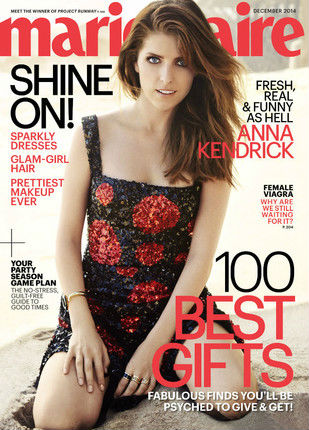 –Anna Kendrick‘s cover story in the latest issue of Marie Claire is more entertaining than the usual celeb puff profile — maybe because she got a little tipsy during the interview.

-The team behind Bill Cosby‘s website somehow decided it would be a great idea to launch a meme generator — which backfired immediately.

–Jennifer Lawrence sings “The Hanging Tree” in the new Hunger Games movie– and cried before she had to do it.

-Meanwhile, JLaw and Josh Hutcherson are both adorably self-deprecating in this interview. “I like [my movies], I just hate that I’m in them.”

–Rihanna went to the White House and did what the rest of us would: pretended to be Olivia Pope handling the situation.

–Taylor Swift has lots to say about her favourite emojis. Of course she does.

-Speaking of Taylor, she looks surfer girl great on the cover of Wonderland.

-Clear the elevators: Solange is getting married this weekend.

-What we learned on last night’s Tonight Show: Jeff Daniels can’t do the running man and Nick Jonas has never seen a mob movie in his life.

-Like everything else in her life, Britney Spears‘ new boyfriend comes courtesy of her father.

–Bryan Cranston is heading back to TV — sorta. He’s producing a new crime drama for CBS.