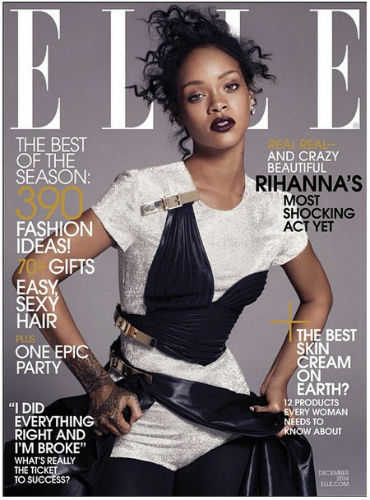 -Is it just me or does Rihanna look really tired on the cover of Elle?

-Meanwhile, Rihanna walked the runway at a vogue ball and totally owned it.

-Here’s a clip from Wild, the movie that might just nab Reese Witherspoon another Oscar. Is that Herc from FNL? Yes!!

-Speaking of FNL alums, this article on the cult of Connie Britton is a must read. “Britton is by no means the biggest star in Hollywood. But if you look closely, she might be one of the most important.”  Hells to the yes!

-The new promo for Girls is here, which is sure to make lots of people irrationally angry.

-Modern Family’s Julie Bowen explains why she intervened to help TV daughter Sarah Hyland end an abusive relationship. “Oh, well the reality is I’m just nosy. I stick my nose in anything and everything.”

-The Suicide Squad movie is starting to take shape. (I still don’t get why they don’t just cast from Arrow. Diggle on the big screen? Come on!). Margo Robbie is reportedly in talks to play Harley Quinn, while Jared Leto may try to fill Heath Ledger’s very large shoes as The Joker.

-The Macaulay Culkin death rumours were a hoax, which he wasted no time making fun of.

–Gabrielle Union penned a great essay for Cosmo about how she’s fighting back after her nude photos leaked. “Friends are assuring you that this will pass and people will move on to the next thing. But in this case, the next thing means the next victim — the next woman to have her naked body exposed to strangers against her will. And the crowd in the arena is going wild. People are critiquing and judging, cheering for more. They’re shouting, ‘Next! Next!’ ”

-I kind of love that Taylor Swift is totally owning her crazy girlfriend persona in her new video.

-Of course Eli Roth married a 22-year-old. Of course he did.

-The new Broad City promo reminds me that I really, really need to catch up with that show. Abbie and Seth Rogen yelling at a kitten is comedy gold.

–Aaron Sorkin says he’s going to quit TV because he’s had “much more failure” than in movies. Wait, are we seriously supposed to feel bad for a guy who managed to get four TV shows on the air, two of which are considered classics?

-I love the news that Paget Brewster and Keith David have joined the cast of Community for Season 6, because they’re both made of awesome.

-I’m not usually an Elie Saab fan, but I want to be buried in the dress Elizabeth Banks’ wore to today’s Hunger Games premiere. It’s much better than Jennifer Lawrence‘s quilted number.

-Meanwhile, Liam Hemsworth says that hanging out with Jennifer Lawrence helped him get over his breakup with Miley Cyrus because she’s “so honest and laughs all day long.”

-Game of Thrones’ Natalie Dormer is a badass in the latest Mockingjay clip — which also features Jesse from She’s All That! (It’s the little things that make me happy…)