-Seeing as Jessica Biel and Justin Timberlake haven’t shot down the pregnancy reports even when they are coming from reputable sites like E!Online means they’re probably true.

-Are they or aren’t they? Jennifer Lawrence was spotted at Chris Martin’s house in Malibu after their supposed split.

-A woman fainted during Amy Poehler’s Toronto event at Indigo last night, to which Amy quipped: “Yup, that’s how I like to end all my interviews.” God, how did I not go to that?

-I really liked this article on how too many TV dramas have morphed into a bad news relay. I’m pretty over the dead kids epidemic.

-Speaking of crime dramas, I love that Serial is getting so much praise. I’m more riveted by that podcast compared to anything on TV right now. (Seriously, what’s up with the cellphone records?!)

–Chelsea Handler says Instagram is being sexist for taking down her topless photo.

–Amanda Bynes was released from her psychiatric hold and already it’s going badly. She’s tweeting in her defense.

-Everyone’s talking about how Zac Efron is supposedly a controlling “dictator” to his “girlfriend,” but I can’t get past the photo on the top of the article. I took the same one when I was at Noma.

–Stephen Colbert sweetly paid tribute to Canada and Kevin Vickers last night, and it was wonderful.

-Here’s our first look at Pride and Prejudice and Zombies. I’m so in.

-Here’s another new clip from Interstellar. This movie is going to be huge. 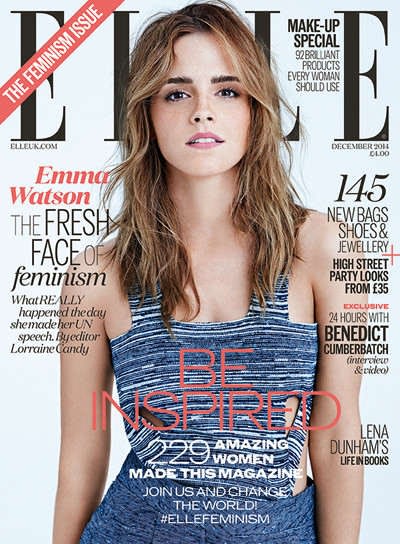 –Emma Watson covers Elle UK’s first ever Feminist Issue and she looks (and sounds) amazing. “Feminism is not here to dictate to you. It’s not prescriptive, it’s not dogmatic. All we are here to do is give you a choice. If you want to run for President, you can. If you don’t, that’s wonderful, too.”

-Um, did Mary Kate Olsen and Olivier Sarkozy get married?!

-This leaked Avengers: Age of Ultron scene also tells us a lot about the new Captain America movie.

-This should restore your faith in humanity: no one bought Kendall and Kylie Jenner‘s dystopian sci-fi novel.

-If seeing Jake Gyllenhaal wet and bothered is your thing, you’ll enjoy this clip from  Fallon.

-The Jessica Biel pregnancy rumours kicked into high gear when she didn’t show up to the amFAR Gala honouring Justin Timberlake last night.

-Meanwhile, Gwyneth Paltrow praised Chris Martin as “father of the year” during a (slightly drunken) speech at the amFAR Gala.

–Queen Latifah has cancelled her Bill Cosby interview over those rape allegations against him. Long live the queen!

–Kanye West turned the tables and stopped a paparazzo so he could take a photo of his shirt.

–Tom Hiddleston is making the jump to TV in a new AMC miniseries.

-No one seems overly impressed by EW’s new Terminator photos.

-Another clip from Interstellar has landed.

–Katie Holmes looks half-asleep on her new People cover, much like readers will be when they read her boring quotes about how she doesn’t want her marriage to Tom Cruise to define her.

-I don’t believe for a second this report about Tom Cruise and Lindsay Lohan dating, mostly because it wouldn’t benefit him in any way.

-According to People, Jennifer Lawrence broke up with Chris Martin because she couldn’t get over his lingering bond with GOOP.

-I watched a few minutes of The Voice last night and thought that Taylor Swift actually seemed to be giving good vocal coaching. Who knew?

-You will not believe Daniel Radcliffe’s rapping skills. The kid did not stammer once while rapping Blackalicious’ “Alphabet Aerobics” on Fallon last night.

-I didn’t necessarily understand Blood Orange’s performance on Kimmel last night, but I kind of loved it.

-I wish Amy Poehler‘s promo tour for her book lasted forever, because she’s a total delight. She tested George R.R. Martin’s Game of Thrones knowledge on Seth Meyer’s show last night, called out the media for pitting women against each other with all those feminism questions (it’s true; those questions are traps), shared some hilarious thoughts about how Parks and Rec should end, and did a wonderful Reddit AMA.

-Meanwhile, this excerpt from Amy Poehler’s book is everything I’d hoped it would be.

-Now that the DVR numbers have been taken into account, The Flash set a record as The CW’s most watched premiere in history. Yay! Last night’s was the best yet.

-I like Leighton Meester’s new song. There. I said it.

-I do, however, want to scape off most of her makeup on her new Nylon cover.

-The New York Times thinks Olivia Pope drinks wine wrong. Preach! During last week’s Scandal when her dad was berating her for drinking the cheap stuff, I remember not buying that he’s a wine snob because he wasn’t even holding his glass by the stem.

–Chris Rock takes to the streets for his SNL promos.

–Sandra Bullock came to an extra’s aid when she collapsed from heat stroke because she’s the best.

-The hospital holding Amanda Bynes has announced that they will hold her for an additional 30 days.

-In her new book, JLo says she’s “been abused in relationships,” causing everyone who reads blind items to raise one eyebrow simultaneously.

-Ohhhh boy. Did Anne Hathaway refuse to shake a journalist’s hand because of Ebola?

-Something good may have come from this fall’s worst new show: Dylan McDermott and Maggie Q are dating.

-Ellen proved that Jake Gyllenhaal is a big scaredy cat.

-Orange is the New Black’s Samira Wiley should be on all the magazine covers ever.

–Norman Reedus says he did NOT beg The Walking Dead producers to not make him gay, contrary to some reports.

–Katniss has a message for President Snow in the final Mockingjay trailer.