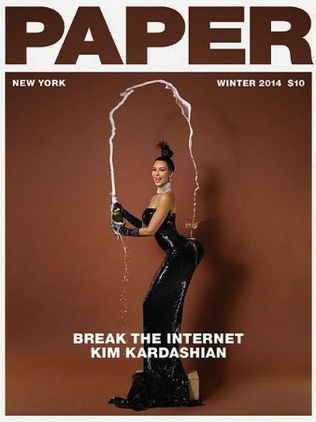 -Paper magazine set out to “break the internet” when they posted their new cover shot last night of Kim Kardashian‘s naked, champagne-soaked ass (as well as the one above) — and they succeeded. They also inspired memes. So. Many. Memes.

-Paper, not wanting to relinquish the world’s eyeballs just yet, then dropped a full-frontal pic tonight. Just in case you didn’t hate the universe enough already.

–Jennifer Aniston claims she doesn’t “give a s–t!” about those frequent break-up rumours, which is kind of adorable.

-Cue the “Climax” headlines: a sex tape featuring Usher and his ex-wife Tameka Raymond is reportedly being shopped around.

–Gwyneth Paltrow says “I’d rather die than study my face.” Yeah, I think most people feel that way about her face.

-I’m glad I’m not the only one not really feeling Sleepy Hollow this season. I heartily agree with this list of 6 ways to fix it (especially #2).

-Speaking of TV, this article about why The CW deserves your attention makes me feel better about my TV watching habits. The only three shows that don’t have a tendency to pile up on my DVR are on The CW, which is terrifying when you realize it’s also the network responsible for this.

–Will Wheaton penned great article for the Washington Post about how to stop online trolls.

-Here’s the first trailer for Anne Hathaway in the film Song One. Is this based on a book? I feel like I’ve read or seen this all before.

-There’s now audio of Bryan Cranston narrating the new kids’ book “You Have to F*cking Eat” — and it’s magnificent.

-The only good thing about the Grumpy Cat movie is Aubrey Plaza sarcastically doing press for it.

–Johnny Depp gets handsy in the new Mortdecai trailer. This movie continues to look…not good.

-A teaser trailer for Insurgent has landed. I finally got around to finishing the books and I just can’t with this series anymore. I just can’t.