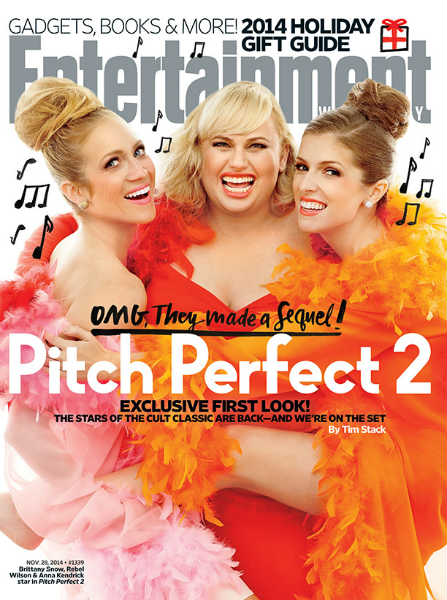 -I usually blindly love any magazine cover that features Anna Kendrick, but the shot that EW chose for their Pitch Perfect 2 cover is all kinds of awks, no? It looks like her leg is trying to swallow Rebel Wilson. The shot of them in the club is so much better.

-I’m super underwhelmed by People’s Sexiest Man Alive choice this year (but maybe that’s just because of the ’90s hair he’s sporting on the cover).  But last year was Adam Levine, so I guess there’s a *bit* of course correction happening.

-Meanwhile, Jason Bateman says he’s ticked at not being chosen.

-Also, we’ve suspected it but now sources seem to confirm that Ryan Gosling hasn’t been named People’s Sexiest Man Alive yet because he rejected them multiple times. Is that why Chris Pratt didn’t make it this year?

–Janice Dickinson says Bill Cosby raped her. There was an immediate “but she’s a crazy model jumping on a bandwagon” backlash on Twitter, until someone pointed out that she told Howard Stern a similar story back in 2006. If she’s lying, she’s playing a hell of a long game.

–Jennifer Lawrence appeared on Elizabeth Banks’ YouTube show, “Ask a Badass,” and is very excited to be the first “lady badass.”

-Meanwhile, here’s a very sanitized view of what it’s like to be Anna’s assistant.

-This is making yesterday’s news of an American Luther adaptation go down easier: BBC America says Idris Elba will film two new hourlong episodes of original Luther next March to air later in 2015.

-For reasons I won’t even try to comprehend, Aubrey Plaza’s basketball team made a fake Burger King commercial.

-It’s cute how Ansel Elgort is trying to make it seem like it ain’t no thing that he’s suddenly swimming in groupies.

-Why is Shailene Woodley gracing one of GQ’s Men Of The Year covers?

-This new Dave Chappelle interview is great (minus the pimp intro). He talks about meeting Rob Ford, and makes some pretty smart comments about Tyler Perry.

–FKA Twigs says dating Robert Pattinson is “very worth it” despite the Twihard-y haters.

-I’m glad the Foo Fighters’ HBO show is getting lots of critic love. It really is pretty great.

-I like this article about what Tom Hardy’s new TV show says about future of TV and movies.