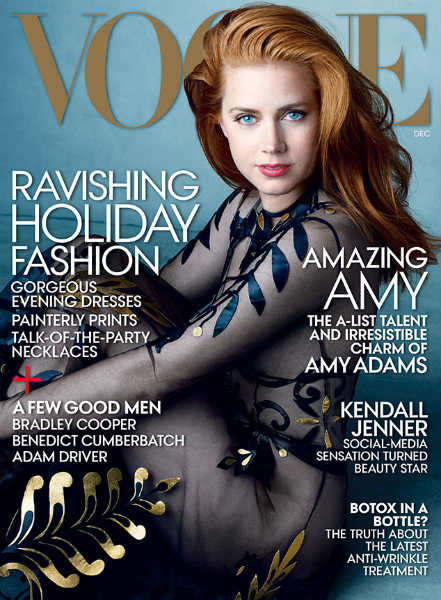 –Amy Adams’ Vogue cover is gorgeous, and she shows off her ballet stretches in her 73 questions video. The print interview is great too, in which she talks about how she thought she’d be more put together by the time she turned 40. (“I still don’t do laundry so I’m always out of things; I’m just not a grown-up at all.”)

-I’m not really sold on Variety’s cover image of Angelina Jolie. It looks like she’s been blown out by an overly aggressive Instagram filter. Her Oscar game remains strong, though.

-Are George and Amal Clooney trying to adopt a baby? Probably not, but just typing that sentence made the floor tilt a bit…

-I learned so much from Vulture’s One Direction glossary of terms. So very much.

-There is already a Jaden and Willow Smith poetry generator and it’s a thing of beauty.

-There are many reasons why I’m creeped out by the Fifty Shades of Grey movie, but Anna Kendrick’s reason might be the best.

–Rachel McAdams celebrated her 36th birthday this week in Toronto, but apparently not with her rumoured boyfriend — who might not be her boyfriend anymore.

-In their lengthy feature, Vulture got Benedict Cumberbatch to say “all the feels.” Hilarious.

-Also, Benedict tried to get Jimmy Fallon to say ‘booty’ on The Tonight Show.

-Jesus Christ, Evangeline Lilly. I want to support you in everything you do but this outfit is making it SO HARD.

-In terrible idea news, Idris Elba is adapting Luther for Fox. As much as I love and adore the original (it’s on Netflix; watch it now!), there’s no way Fox will keep it as gritty and real. Plus, Elba’s insane charisma elevated the show and disguised a lot of its flaws, which will be way more obvious in a Luther without him or Ruth Wilson.

-In TV news that actually sounds great, Tom Hardy will star in a new period drama for FX that’s based on a story written by him and his dad (the awesomely named Chips Hardy). Have you seen Locke? It’s basically just two hours of Tom Hardy driving and it’s absolutely mesmerizing.

-Hulu also ordered a bunch of new shows, including an Amy Poehler-produced comedy starring Billy Eichner and a new series from Jason Reitman.

-This new Hunger Games clip reminded me what happens in the book — including the parts I didn’t like. Hopefully the movie glosses over those.

-I very rarely praise Justin Timberlake, but his Twitter response to a guy who said he jumped on the Grizzlies bandwagon was pretty swell.

-I am so on board with this trailer for The Duff! I’m even willing to overlook the offensiveness of someone as petite and cute as Mae Whitman being called a “designated ugly fat friend.” It hits all my teen movie requirements (not to mention Allison Janney crying while drinking wine and riding a lawn mower). Plus, I’ve been waiting for Whitman to be a movie star ever since she wailed outside her dad’s car in Hope Floats.