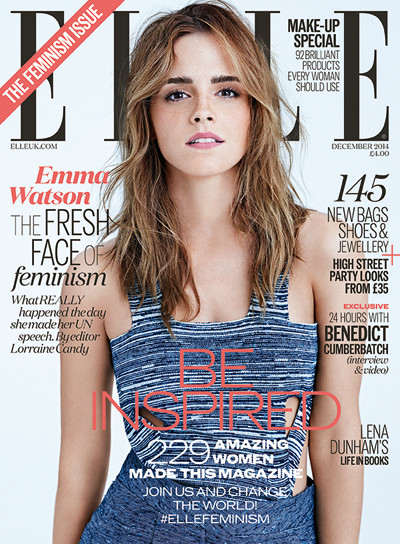 –Emma Watson covers Elle UK’s first ever Feminist Issue and she looks (and sounds) amazing. “Feminism is not here to dictate to you. It’s not prescriptive, it’s not dogmatic. All we are here to do is give you a choice. If you want to run for President, you can. If you don’t, that’s wonderful, too.”

-Um, did Mary Kate Olsen and Olivier Sarkozy get married?!

-This leaked Avengers: Age of Ultron scene also tells us a lot about the new Captain America movie.

-This should restore your faith in humanity: no one bought Kendall and Kylie Jenner‘s dystopian sci-fi novel.

-If seeing Jake Gyllenhaal wet and bothered is your thing, you’ll enjoy this clip from  Fallon.

-The Jessica Biel pregnancy rumours kicked into high gear when she didn’t show up to the amFAR Gala honouring Justin Timberlake last night.

-Meanwhile, Gwyneth Paltrow praised Chris Martin as “father of the year” during a (slightly drunken) speech at the amFAR Gala.

–Queen Latifah has cancelled her Bill Cosby interview over those rape allegations against him. Long live the queen!

–Kanye West turned the tables and stopped a paparazzo so he could take a photo of his shirt.

–Tom Hiddleston is making the jump to TV in a new AMC miniseries.

-No one seems overly impressed by EW’s new Terminator photos.

-Another clip from Interstellar has landed.