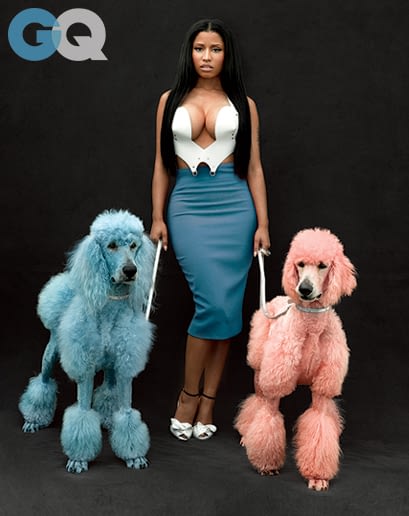 -If you want to maintain a good opinion of Nicki Minaj, you might want to skip her new GQ profile. She falls asleep on the interviewer (four times!), dismisses questions about what “Anaconda” is trying to say about body image (“I knew that I wanted a gym theme. And that’s that.” ), and generally comes off as bored and inarticulate.

-The stars from Sisterhood of the Traveling Pants reunited again this weekend to support America Ferrera’s Broadway performance. The fact that those four still hang out is more incredible to me than a pair of magical jeans that fit them all.

–Jada Pinkett Smith (the best thing about Gotham) landed her role because she arrived at her audition with a man on a leash.

-This video of Jamie Oliver and Taylor Swift having a “bake off” for charity is surprisingly adorable.

-I actually kind of think Taylor Swift’s advice to Selena Gomez about not being the smartest person in the room is a bit mean girl-y. Just me?

-Oh dear. Buffy star (and newlywed) Nicholas Brendon was arrested this weekend on suspicion of damaging property and resisting arrest in Idaho, where he was attending the Tree City Comic Con. He’s blaming a mix of prescription meds and alcohol. I hope his past problems haven’t resurfaced.

-James Franco looks pretty happy for someone who just tackled a paparazzo.

–Seth Rogen fulfilled his lifelong dream (and mine) to sing “Poison” onstage with Bell Biv DeVoe.

-Glee star Matthew Morrison married model Renee Puente this weekend. This People story about it feels like a copy and paste from a press release. Did we really need to know who the event planner, photographer and videographer were?

-In other weekend wedding news, Candice Accola got hitched and most of her Vampire Diaries costars showed up to help her celebrate.

–Tom Hanks has written a short story for the New Yorker because there’s absolutely nothing that man isn’t good at.

–Jennifer Garner is taking credit for Ben Affleck going full-frontal in Gone Girl. But what if you blinked and missed it? What then? Don’t fail me now, Tumblr!!

–Ansel Elgort went to Amsterdam and visited the bench from The Fault in our Stars, which is kind of sweet. I guess I’ll forgive him for making dumb comments about how his social media outreach is stronger than any publication’s.

-As you gaze upon the hotness of Lenny Kravitz‘s photo spread in Uptown Magazine, remind yourself that he’s now 50.

-I finally caught up on the Serial podcast and now I’m obsessed. Finding this subReddit where people have made insanely detailed timelines and evidence lists isn’t helping.

-It looks like Mulaney‘s Fox sitcom might be the first casualty of the new TV season. I love his standup (and he wrote the Stefon bits for SNL), but his show is really, really bad.

–Jessie Ware says Momofuku’s pork buns have shaped her life. I feel her.

–Ryan Reynolds was honoured at Canada’s Walk of Fame, but Blake Lively didn’t accompany him. Perhaps if she had, she would have talked him out of that terrible tux.

–Blake, meanwhile, was spotted shopping in New York in an outfit that doesn’t make sense for any temperature.

-Here’s the trailer for The Comeback. I’m going to have to catch up on this show, aren’t I?