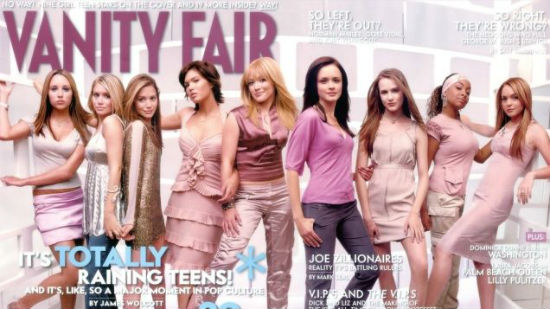 –Evan Rachel Wood wrote a series of sad tweets about her 2003 Vanity Fair cover shoot. “I was 15 and felt for the first time my identity being erased and the pressure to shut up and do what you are told.”

–Iggy Azalea is NOT happy with her Maxim Australia cover.

-In other cover news, Kerry Washington looks fresh-faced and amazing on Allure.

–Blake Lively made her first red carpet appearance since she announced she’s expecting and I thought she was going to strain something the way she was pushing out her tummy so hard.

-Also, there are more suggestions that parts of Blake‘s Preserve is plagiarized.

-I’m not a comic book fan so the only thing I know about the Suicide Squad is what I’ve gleaned from superhero shows on The CW (where I’m mostly  only paying attention to the abs), but I might have to read up now that Ryan Gosling, Will Smith, and Tom Hardy are rumoured to be joining the cast of the upcoming movie adaptation.

–Jane Campion‘s Top of the Lake is officially returning for Season 2. As much as I admired that show, I think I’m taking a break from unrelentingly bleak TV for a while.

-To that point, I didn’t stick with The Knick, but this direction-focused recap makes me want to pick it up again.

-Speaking of bleak TV, I steered clear of Gracepoint after watching the terrible first episode, but every TV critic I follow on Twitter seems united in their belief that Anna Gunn is really, really bad in it.

-It’s been a rough week. Here’s a lovely photo of Joshua Jackson in Glamour, where he says he and Diane Kruger aren’t married because they’re both children of divorce and “not religious.”

–Gillian Anderson thinks the next X Files movie should be of the “monster of the week” variety. I don’t disagree. I was a HUGE fan of that show and I still have no idea where the mythology ended up. Something about bees, maybe?

-I don’t know about you, but I always feel better knowing that George Clooney is in the same country as I am.

-The cast of The Wire came together last night for a reunion at PaleyFest. Here are 12 revelations from the panel, or you could just watch the whole thing here.