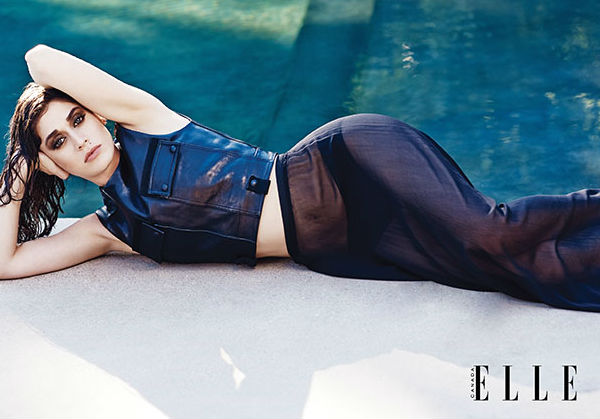 –Lizzy Caplan looks fab in the pages of Elle Canada, where she talks about how she’s not ready to settle down and have kids. I didn’t love this season of Masters of Sex, but I always love her.

–Taylor Swift’s hair has never looked better than it does on the cover of British Vogue. It turns out that her feathered bangs actually work when best slicked back. Who knew? The accompanying article is more of the same old. She says she’s not looking to date anyone right now, saying that “Dating or finding someone is the last thing on my mind, because I can’t picture how it could work with the way my life is.”

-There’s still no word what Ashton Kutcher and Mila Kunis named their new baby girl which is surprising, given his history of oversharing. [Update: They named her Wyatt Isabelle Kutcher, which I kind of adore. Well played, Trucker Hat.]

-I love pretty much every single person in this movie cast. Too bad they came together for such a crappy premise.

–Wait, wait, wait. Did Kristen Bell just show up on a red carpet wearing the same dress she wore in her Samsung commercial? Is this some kind of subliminal advertising or something?!

–Jason Derulo admitted that he ended his three-year relationship with Jordin Sparks over the phone. Charming.

-The royal family has issued a stern warning to a freelance photographer who keeps getting too close to Prince George.

-If even half of these stories about Prince are true, I love him even more.

–Justin Bieber took a swing at some paparazzi in Paris but he won’t be charged for anything because life isn’t fair.

–TMZ reported that Charlie Sheen is being investigated for allegedly pulling a knife on his dentist, but his dentist released a statement saying the actor “has been the best patient” and “nothing but a gentleman” who “tips everyone.” Whoa whoa whoa — we’re supposed to TIP our dentist?!

-The night before the press preview for her London play, Lindsay Lohan partied until 3am. Old habits…

-This Matthew McConaughey pep talk to a football team is like if Coach Taylor was always high.

-I love Roxane Gay (following her on Twitter was the best decision I made this month) and I love her interview with Lena Dunham.

-On Conan last night, Jesse Tyler Ferguson talked about crashing a frat party with Eric Stonestreet and walking in on a couple having sex.

-Stalker actually did well in the ratings? What’s wrong with humanity?!

–Jennifer Garner was very charming on The Tonight Show last night, telling a story about how she met George Clooney when she had lice (while doing an amazing Ben Affleck impression), and then playing Catch Phrase.

-Here’s a hilarious step-by-step guide to spotting Ben Affleck’s dong in Gone Girl. “Focus intently on the screen at this moment. One method of concentration I’d suggest is to open your eyes very wide and emit a high-pitched, unnerving keen, in order to better block out dangerous and distracting external stimuli.”

–Kate Winslet says she and Leonardo DiCaprio never hooked up so stop asking her about it.

-Here’s the first teaser trailer for Pixar’s Inside Out, starring the voices of Amy Poehler and Bill Hader.