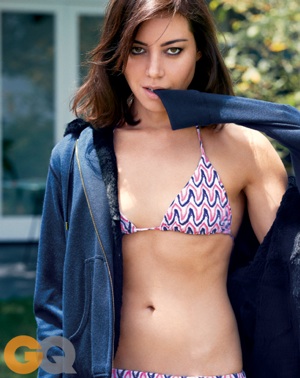 -Kind of disappointed that Aubrey Plaza posed in a bikini for GQ, but she was redeemed by trolling her interviewer (in a hilarious, deadpan way with an interviewer who seems on board with it).

-Speaking of Aubrey, she stars in a fake Daria trailer. This needs to go from fake to real STAT!

-Hmmmm….word is Rosamund Pike scored the female lead in the Gone Girl movie. Not sure how I feel about that.

–Pretty Little Liars star Ashley Benson had to delete an Instagram photo after she made fun of Amanda Bynes and everyone freaked out.

-Rumour has it that Beyonce has thrown out 50+ songs for her new album, and it might not be done in time for fall.

-I’m not 100% sold on what Diane Kruger is doing on The Bridge, but she’s still adorable with Joshua Jackson.

-This is what Shakira looks like six months after giving birth. What? How? What?

–Heidi Klum says all those topless Instagram photos she posts are taken by her mom, like that makes it somehow ok.

–Oprah will once again submit to being interviewed by David Letterman. This should be fun.

-The cast and crew of Glee gathered together today for a private Cory Monteith memorial.

-Is there anything Benedict Cumberbatch can’t do? He just officiated a wedding.