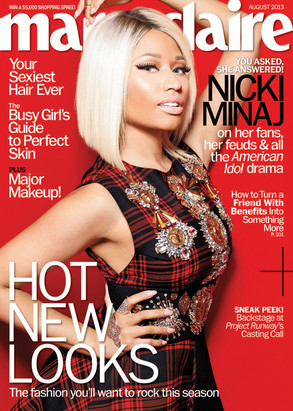 -A surprisingly normal-looking Nicki Minaj covers the new issue of Marie Claire, where she offers bon mots like: “Men are kids at heart. They want to be nourished and pet like a dog.”

-Meanwhile, here’s Nicki’s new video with Mario (who is still a thing, apparently).

-Speaking of Marie Claire cover girls, Diane Kruger is beyond beautiful, but I’m not sure her new UK cover is doing it for me. Or maybe I’m just jealous of her arm candy.

-But her new show The Bridge (which debuts tomorrow night) is getting great reviews.

–Amanda Bynes returned to court today over that bong incident and wore a blue wig and sweats, which is probably more than we could have hoped for.

–Jay-Z says Miley Cyrus represents “an old worlds worst nightmare,” adding “black neighbor, and the daughter not seeing color.” I think it was a compliment. Miley certainly took it that way.

–Mariah Carey tweeted a photo of her “fashionable sling” after dislocating her shoulder on the set of a music video.

–Victoria Beckham wore the same dress twice and now the world is spinning off its axis.

–Kanye West is not very happy that a rough version of his new video has leaked online.

-Everything’s coming up Clooney this week! Not only has he publicly re-embraced bachelorhood, he’s also going to be honoured with the Stanley Kubrick Brittania Award for Excellence in Film by BAFTA LA.

-I’m so glad that the Dustin Hoffman video in which he talks about how Tootsie made him realize what it’s like to be a woman is going viral. It’s great.

–Lea Michele is posting a lot of bikini pics from her vacation in Cabo San Lucas. She even included the patented “I’m going to use my biceps to squeeze my boobs together  so they look bigger” pose. Classic.

-In the new issue of Details, Ryan Reynolds talks about living “in a shack in the woods” in British Columbia with Blake Lively, and wanting lots of babies.

–Rihanna was spotted being escorted from a Kings of Leons concert looking totally wasted. That didn’t stop her from posting lots of gushy messages about the show.

-Speaking of Rooney, she just signed on to star alongside Martin Sheen in the upcoming movie Trash.

–Leonardo DiCaprio‘s camp is reportedly asking sites to remove photos his reported new girlfriend shared on social media, apparently because they don’t understand how social media works. You can still find them all over the place because, um, internetz!

-Meanwhile, here’s a great peek at how Leo handles his fame.

-It’s awesome that Nardwuar is getting some love from Slate. (I especially liked the observation that hip hop artists are invariably the first to see past his geeky shtick and appreciate his level of research into their musical backgrounds, well indie acts tend to bully him.)

-Is it weird that when I looked really quickly at JLo’s new W cover, I initially mistook her for Julianna Marguiles?

-The trailer for the new Hulu series Moone Boy, starring Chris O’Dowd, is all kinds of cute. This kind of thing is why I haven’t watched network TV for months.

-The first Jonas Brother is expecting a baby with his wife. Anyone else envision these guys turning into Hanson II?

–Channing Tatum went to a Subway in Vancouver and everyone OMG’d.

-There is a Nerdist podcast devoted to writers? And the latest one features the LBD team? Worlds colliding!

-In a new interview, Amy Poehler talks about the upcoming season of Parks & Rec and recasts Game of Thrones with characters from her show.

-Check out this fascinating NYT profile on Gabby Hoffman, who seems like someone who should be a much bigger star than she is by now.

-Did Lady Gaga get a new nose or just lose a bit of weight?

-I’m really digging the new trailer for The Lifeguard (though I’d dig any trailer that features Kristen Bell, Martin Starr and Mamie Gummer all in the same movie).