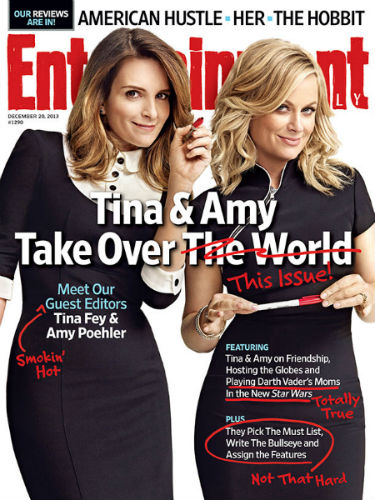 –George Clooney recorded a message for the protesters in Ukraine. So wonderful and noble, I’m even going to forgive him for the vertical iPhone video.

-Wanna feel really bad about your life? Check out Rihanna‘s Instagram feed, where she’s posting all the free stuff designers are sending her for the holidays.

–Kristen Stewart is the new face of Chanel because when you think of luxury goods, her surly face immediately springs to mind.

–Emma Stone and Bill Murray are two of the most charming people ever, so when they joined forces to entertain troops, the adorableness was off the charts.

-Speaking of charming, Tom Hanks was on Kimmel last night and surprised some unsuspecting audience members by posing with them for their holiday xmas cards.

-Prison Break’s Robert Knepper has just joined the cast of Mockingjay as Antonius. Wait, who the hell is Antonius? Is this how they’re splitting up the last Hunger Games book into two movies — by making up new characters?

-The Screen Actor’s Guild nominations came out today, and the snubs were surprising. Among those left out were Robert Redford, Saving Mr. Banks, Orange is the New Black, The Good Wife, Mad Men, Amy Poehler and  Tatiana Maslany. It’ll be interesting to see how tomorrow’s Golden Globe nominations shake down.

-This is a great (though depressing) look at the 16 female TV characters that were bullied by the Internet this year.

-Now that Madonna has broken up with her boytoy, everyone’s wondering if she’ll get back together with Sean Penn. This would be a sweet reconciliation story, assuming we can all forget about that time he held her hostage and hit her with a baseball bat.

–Gisele Bundchen‘s breast-feeding photo is giving everyone lots of feelings and opinions.

-Remember when Kim Kardashian said she was giving a “big middle finger” to everyone who called her fat? Now she’s showing off her bikini body on the cover of Us Weekly. So…yeah.

-I saw Inside Llewyn Davis last night, which I didn’t love as much as I wanted to. But I really liked Oscar Isaac. I like him even more after hearing his folk song take on Katy Perry’s “Roar.”

–Demi Lovato says she used to smuggle cocaine onto planes. Man, I felt guilty that one time I accidentally packed a full-sized moisturizer in my overhead bag and no one noticed.

-Critics who got screeners for the new season of Community are loving it.

–Ellen Degeneres is denying those rumours that her marriage is on the rocks.

-Here’s the red-band trailer for Bad Words, the film starring and directed by Jason Bateman that got good reviews at TIFF.

–Blake Lively is slowly starting to appear on red carpets again. Is she sick of baking pies and ready for a comeback?

–Lizzie Caplan told a hilarious story about getting plastered the on set of True Blood the first time she had to get naked.

-For some reason, this old interview of Paul Rudd and Jason Segel is making the rounds. They were promoting I Love You Man and were very, very high. (I love that in spite of his altered state, Jason is still really concerned that the interviewer has a job to do.)

-More on Macaulay Culkin’s new band: “And you’re sticking with Velvet Underground and pizza in your future songs?” “Yeah, I think so.”

-Why is everyone losing their poo over the Godzilla trailer? None of the actors actually speak, and the final money shot of the monster is drenched in fog. I don’t get it.