–Jacob Elordi is in the new issue of GQ Australia, and despite being spotted with Euphoria costar Zendaya in Greece (and then at the movies. And then in Sydney), he denies they’re dating (“she’s like my sister”). The boy still raves about her though, cause he has eyeballs: “Zendaya is an amazing creative, you know? She’s super dope to work with. She’s an incredible artist and a very caring person to all of us.”

–Pete Davidson is making his standup audience sign $1 million NDAs. (In this economy?!) It was enforced at a recent San Francisco show where a fan refused to sign the agreement. This is, obviously, stupid. If your material is ready to be viewed by the paying public, said paying public can judge/talk about it.

–Prince William and Princess Kate are going to bake up some holiday treats — and you can watch! The royal couple will appear alongside Mary Berry in a BBC special, A Berry Royal Christmas.

–Nick Offerman and Amy Poehler’s Making It returns to NBC tonight, so here’s 60 seconds of them slinging craft-related puns at each other.

–Tom Welling is having a big month. Not only will he reprise his Smallville role on next week’s CW crossover, but he and his longterm girlfriend Jessica Rose Lee got married over the weekend.

-My god, I can’t believe the risks Watchmen is taking every week. I’m not even sure how I feel about last night’s insane reveal, but it’s breathtakingly ballsy. Please watch this show.

–Alanis Morissette just announced a Jagged Little Pill 25th Anniversary tour with Garbage and Liz Phair. Yes to all of that!

-Is This Is Us star Justin Hartley‘s divorce going to be messy? Days after the actor filed the paperwork, his wife broke her social media silence by posting a quote: “It’s hard to watch people change right in front of you. But it’s even harder remembering who they used to be.”

-Sadness: Shelley Morrison, who played Rosario on Will & Grace, passed away at 83.

–Martin Scorsese‘s new movie The Irishman may be on Netflix, but that doesn’t mean he wants you to watch it on the subway. “I would suggest if you ever want to see one of my pictures, or most films – please, please don’t look at it on a phone, please. An iPad, a big iPad, maybe.”

-Knives Out (which I saw this weekend and was thoroughly delighted by) doubled its tracking predictions by opening with a $41.7 million domestic box office, pretty much making back its budget.

–Margaret Qualley and Miranda July posted some videos on Instagram which seems like it’s performance art, but then Jaden Smith waded into it and I’m confused. He’s in on it, right?

-This is a wonderful feature on Laura Dern reflecting on her career, from Enlightened being ahead of its time (“But now, this year, this moment particularly, everywhere I go, people are bringing it up, like, ‘Oh my God, I just found Enlightened, we are Amy Jellicoe. We are all Amy'”)  to the fallout of Ellen’s infamous coming out episode (“We only did it for what, ten days? We all spent the next couple of years really struggling in work and safety. It was radical to experience that. It was the only time I ever experienced having to have to have full security detail”).

-SAG-AFTRA has launched an investigation into Gabrielle Union‘s firing from America’s Got Talent.

–Josh Hartnett and his brother are drug dealers who get in over their head in the Inherit the Viper trailer. 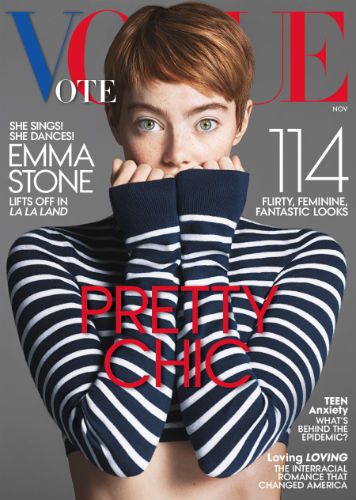 I really need Emma Stone and Andrew Garfield to stop f–king with my head and toying with me. THIS ISN'T A GAME. https://t.co/8A1L6zu6uU

–Emma Stone and Andrew Garfield are playing with our hearts again by being photographed together.

-Meanwhile, Jackson (and his sexy beard) are back to filming The Affair.

–Vin Diesel praised Dwayne Johnson‘s Fast8 performance; The Rock responded by thanking everyone in the cast but Vin. God, I’m living for this!

–Idris Elba posted a photo of him working out in just a pair of boxers. Happy Monday!

-He also says he turned down drugs from Robin Williams and John Belushi.

–Rosario Dawson has the weirdest contract I’ve ever heard of. Marvel is so scared that she’ll reveal spoilers that all she knows every year is that she’ll be in four episodes of a Netflix show at some point — but she doesn’t know when or which shows.

–Amy Adams is pretty much the only celebrity who can pull the “aw schucks, I’m so naive” card and get away with it in my books. I blame Enchanted.

-Sweet! Feist is reuniting with Broken Social Scene on the upcoming new album.

-Out of all the Hip tributes I read this weekend, this one and this one got me right in the feels.

-Crazy Ex-Girlfriend’s Vincent Rodriguez III is posting photos from his Disneyland trip with his husband and it’s all kinds of cute.

–Courteney Cox ate rotting sheep on while filming Running Wild With Bear Grylls; did not enjoy it.

-Is Tom Cruise holding up the new Mission Impossible movie with his money demands?

-One of my favourite people I’ve ever interviewed is Nick Offerman, because you could throw the silliest question at that guy and he’d respond with the most thoughtful, lovely answer. I was reminded of that by this AV Club interview, whether he’s talking about fans over-simplifying Ron Swanson as a breakfast-loving, Scotch-drinking libertarian (“He was much more complex than that. He was a very outspoken feminist. He was a man of few words and people mistook that for a man of few colors”), or his sex life with Megan Mullaly (“Look, I’m 46, Megan’s 57, and we have a happy marriage. We get it on with each other and we feel very celebratory about that.”)

-Meanwhile, the little girl who plays Eleven shaved her head for the show to the tune of Beyonce’s “Pretty Hurts.”

-THR published an article about how TV production is exploding in Vancouver: “If you’re a paparazzo, you should go to Vancouver because it’s where every television star is going to be running around and misbehaving.” Oh, THR. They already are. The CW casts seem to be single-handedly powering blind item sites these days.

–Aaron Paul is getting into the producer gam;. he’s sold a one-hour drama script called Blackmail to NBC.

-Sorry, nerds. Ian McKellan will not officiate your LOTR-themed nuptials.

-Um, why is Jason Momoa hanging with his Game of Thrones fam in Ireland?

-Speaking of GOT, that awesome shot of Jon Snow being crowded in battle last season was actually Kit Harington’s idea.

–Meg Ryan and Tom Hanks are shooting a new movie together? TAKE MY MONEY NOW!

-Hmmm. Days after THR’s scathing article about Leonardo DiCaprio‘s charitable foundation, he abruptly dropped out of hosting a fundraiser for Hillary Clinton at his Hollywood Hills home. It’ll now be held at the nearby residence of Justin Timberlake and Jessica Biel.

–Kevin Spacey has never been happier than this moment.

-Such a good read: “Mary Jane’s Hair Color: The Code for Racist Rhetoric”

-Speaking of great reads, this is a good one on the struggle for small shows to be seen in the times of peak TV.

-In case you ever doubt how powerful Barbra Streisand is, she got Apple to change the way Siri pronounces her name. “She pronounces my name wrong. With a soft S, like sand on the beach. And so what did I do? I called the head of Apple, Tim Cook.”

-The Ben-Hur remake belly-flopped at the box office this weekend. Let’s all see if that gets as much press as the Ghostbusters receipts did, shall we?

-Whoa. Sleigh Bell (love them!) are suing Demi Lovato (love her!) for unlawfully sampling their music.

–Helen Mirren was shutting down sexist interview questions as far back as the ’70s.

-Lindsay Lohan will do a Russian TV interview — but only if she gets to  meet Putin. Bless her heart.

-Congrats to Chris Hardwick, who married Lydia Hearst this weekend. Everyone shits on him now because he’s so ubiquitous, but I still kind of love him.

-This is boss: Katie Couric took a $1 million pay cut to save other people’s jobs.

–Halle Berry proves she’s the wrong mom to mess with in this Kidnap trailer.