-Blerp. Rihanna just Instagrammed a cuddly photo of her with Chris Brown along with the lyrics to “Nobody’s Business.” Now if only she would stop trying to make it our business…

-Meanwhile, Chris is off the hook for that time he allegedly swiped a woman’s cell phone.

-It’s been a big week for Danielle Fishel. First she announced she’ll be reprising her role as Topanga, and then she nailed her Lindsay-Lohan-as-Liz-Taylor impression.

-I can’t tell if the guy from The Wanted is mocking Lindsay Lohan or supporting her with this “Free Lindsay” t-shirt he wore in concert last night.

-Meanwhile, Lindsay‘s alleged victim has teamed up with Gloria Allred.

-The best thing that critics seem to be saying about Katie Holmes’ return to Broadway is that she “seems at ease.” Um, ok?

-Did you know that the little girl who played a young Liz Lemon in the wedding flashback on 30 Rock is actually Tina Fey’s daughter? Adorable!

–Jessica Biel gushed about newlywed life while taping an episode of Ellen that’s set to air next week.

–Sienna Miller says she loved giving birth so much that she’d do it every day. Uh huh.

-Meanwhile, his ex Jennie Garth was spotted grabbing coffee with Luke Perry. Let’s all try to will that relationship into existence, mm-kay?

–This photo of Justin Bieber that everyone’s oohing about gives me a bad case of the icks.

-Well, this is surprisingly: Halle Berry and Gabriel Aubrey say they reached an “amicable” custody agreement.

-The season 2 trailer of Girls has landed, featuring blink-and-you’ll-miss-’em cameos by Donald Glover and Patrick Wilson.

-It’s been a rough day for Lindsay Lohan (even more so than usual). Besides getting arrested in the wee hours of the morning for allegedly punching a woman in a nightclub over one of the guys from The Wanted(!), she also found out she’ll be charged with lying to police for a car crash in California. She then got into a Twitter fight with her assistant, whom she kicked out of the car when he came to pick her up from the police station.

–Justin Bieber and Selena Gomez had a happier night — or at least a more kissy one. And it was at Dave and Buster’s, which is both eye-rolly and adorabs!

–Megan Fox makes sure to turn to the side while posing for cameras so we can all take a gander at her newly baby-free, concave stomach and hate ourselves even more. Great.

-So this photo of Jared Leto‘s weight loss is probably the grossest thing you’ll see all year.

–Guy Ritchie and his fiancée just had a kid.

-Whoopsie! Mary J. Blige and her hubby are being sued for defaulting on a $2.2 million bank loan.

–Emily Owens M.D. has just been cancelled. Makes sense. I’ll watch pretty much any fluffy show the CW puts on air, and even I couldn’t stomach that one.

-To promote The Amazing Spider-Man DVD, the studio released this “Peter Parkour” video of a guy doing stunts around London, which I love (even though it makes me nostalgic for Misfits‘ Simon).

–Rihanna and Chris Brown now have matching Rolexes, just in case you weren’t already annoyed by them.

-The idea of Bobby Cannavale and Rose Byrne hooking up makes me inexplicably happy.

-The idea of Robert Pattinson and MIA as drinking buddies also tickles me. I’m weird like that.

-Meanwhile, it looks like Kristen Stewart is now taking grooming tips from RPattz.

-Now it’s Matthew Perry‘s turn to spoof that Angus T. Jones clip. I know this meme just started, but can it be over already?

-On the same day Bobbi Kristina Brown crashed her car, her adopted brother/erstwhile boyfriend, Nick Gordon, was busted for reckless driving. He doesn’t look too broken up about it in that mugshot, though.

-You know how I love me some roundtables! This week, it’s the Hollywood Reporter’s with directors.

-The NSFW trailer for Freeloaders has landed. It features Olivia Munn in a bra, so I’m sure it’ll do just fine. 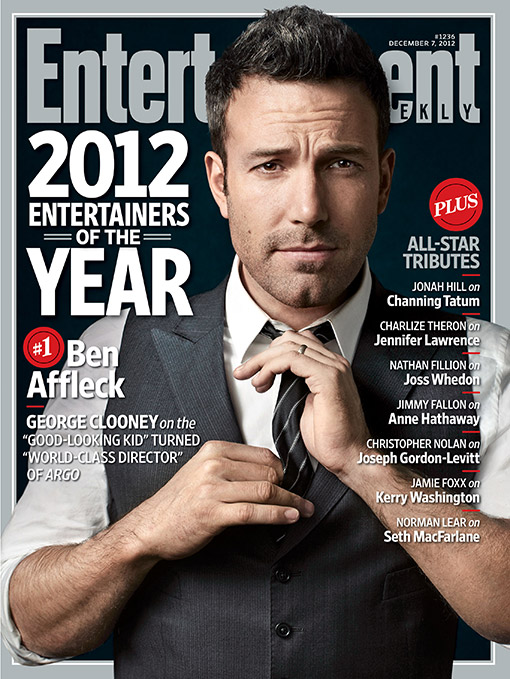 –Ben Affleck has just been named Entertainer of the Year by EW. Well, I guess his confused parenting style has been quite entertaining…

–Lindsay Lohan just got arrested again. Alright, can we just be done with her now? Everyone used to trot out the ol’ “but she’s so talented!” excuse for giving her another chance, but Liz & Dick buried that theory. Let’s stop pretending she’s still famous and maybe she’ll stop believing it too.

-What are the chances that this Jessica Simpson pregnancy won’t feel like it’s been going on for 17 years? Fingers crossed!

-Meanwhile, Jessica‘s publicist refused to comment on the pregnancy report, which means there’s totally a bun in that oven. Weight Watchers does not sound thrilled.

–Jared Leto looks like a woman now. I bet he still leans real nice, though.

-Here’s the 26-year-old art dealer (and son of Julian Schnabel!) who Demi Moore is probably boning.

–Amy Locane-Bovenizer (who everyone is referring to as a Melrose Place alum but she’ll always be Crybaby‘s Allison to me) , was convicted of vehicular homicide.

–Brad Pitt told his kids that he might be Santa. (Maybe he’s just trying to justify the bad beard.)

-New photos from the set of Catching Fire have landed.

–Shia LaBeouf might have broken up with his girlfriend to start dating Nymphomaniac co-star Mia Goth who — despite her last name — is disappointingly ungothy.

–Daniel Craig is officially a better shopper for baby stuff than me (though, to be fair, that’s a pretty large club).

–Dule Hill (Preston!) is separating from his wife.

-This Flight parody is long but awesome.

-Is Selena Gomez getting relationship advice from Katy Perry? And wouldn’t that be like getting sobriety tips from Charlie Sheen?

–Evangeline Lilly has the most unflattering, dated haircut I’ve ever seen. There better be a smoke monster to blame for this.

-Have you seen Silver Linings Playbook yet? It’s surprisingly great. It would have been much less great had David O. Russell went with his original casting vision: Vince Vaughn and Zooey Deschanel.

-What Halle Berry and her babysitter have to say may play a big part in whether or not prosecutors file criminal charges against Gabriel Aubry.

-Here’s video of Community’s Alison Brie dancing  the Charleston, which almost makes up for her finger-in-her-mouth posing.

–Bobbi Kristina Brown is having a rough week. First, she ended her engagement and now she’s crashed her car.

-All the closeups of Justin Bieber‘s face in his new perfume commercial make me feel like a creepy oldster. Also, would it have hurt him to throw in one quick fondue scene?!

–Kim Kardashian‘s lawyers were in court today, trying to get her divorce proceedings rolling (finally).

-How did I not know that Leslie Bibb was dating Sam Rockwell? Or did I know, and just repressed it out of irrational jealousy?

-This blog has made it to Round 2 of the Canadian Blog Awards. Please vote!

-Whoever is in charge of the Old Navy commercials this holiday season is killing it. First, they reunited the Griswolds, and now they’ve gifted us with “Twas the Jordan Knight Before Xmas.”