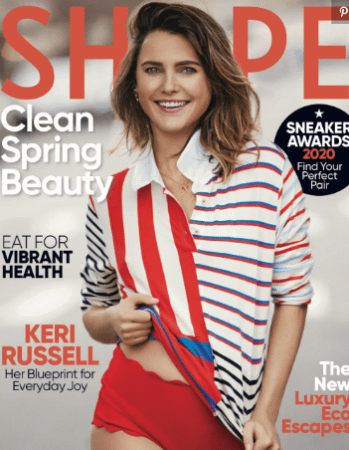 –Keri Russell covers Shape, in which she says her husband Matthew Rhys calls her style “Sam Shepard from The Right Stuff” (“We laughed really hard about it, but I realized that’s my true fashion—like tough guys. Growing up, I didn’t play with Barbies or dolls. I wanted the adventures”), talks about doing the horror movie Antlers (“I’m a total scaredy-cat, but I think the reason why it’s OK for me to do scary movies is because I’m scared all the time. I’ll be in the bathroom getting ready, and Matthew will be coming down the hall and he’ll warn me, ‘I’m about to come in.’ And I’ll still scream!”), and reveals her feel-good essentials (“I need those little bits of time to myself. And time to see girlfriends. If you have that, if you have good sleep, if you have good sex—all those things just make you feel great”).

–Harvey Weinstein‘s defense team has asked for a 5-year sentence, citing his charity work and the stress of the allegations: “Mr. Weinstein cannot walk outside without being heckled, he has lost his means to earn a living, simply put, his fall from grace has been historic, perhaps unmatched in the age of social media.”

-Also, according to unsealed court documents, he once said in an email Jennifer Aniston “should be killed.”

-First reactions to movies when the full reviews are still embargoed tend not to be super reliable, but people seem enthralled by the live-action Mulan.

–Angelina Jolie shared a personal essay for Time and revealed that daughters Zahara, 15, and Shiloh, 13, have both undergone recent medical complications. “I have spent the last two months in and out of surgeries.”

–Brad Pitt skipped the BAFTAs to be at one of his daughter’s sides during her surgery.

-Meanwhile, sources close to Brad Pitt insist his relationship with Arrested Development’s Alia Shawkat is “strictly platonic.” I’m more intrigued by who approaches them to talk during that video of them at a concert. Is that Beck?!

–Corey Feldman accused Charlie Sheen of sexually abusing Corey Haim in his new documentary, which screened last night. This is an old allegation that Sheen publicly denied and sued the National Enquirer over in 2017. At the time, Haim’s mother sided with Sheen.

-The Outsider was one of those shows that didn’t get a lot of buzz, but it felt like everyone I know was watching it. The ratings were surprisingly good, too.

-This excerpt from the new book Her Stories is about the Days of Our Lives devil possession story of the mid-’90s and how it was kinda all about the religious right.

-In a video interlude shown during her current world tour Billie Eilish performs a poem about her unique style. “If what I wear is comfortable, I am not a woman. If I shed the layers, I am a slut. Though you’ve never seen my body, you still judge me for it. Why?”

-The Flip The Switch challenge has been sweeping TikTok the past couple of weeks, and now celebrities are starting to get in on the action.

–Selena Gomez said her first onscreen kiss was with Dylan Sprouse and “It was one of the worst days of my life,” and he’s since poked fun at himself on Twitter.

-An Australian bushfire benefit concert has been cancelled after Miley Cyrus pulled out due to coronavirus concerns, BTS has cancelled shows, and now it looks like Coachella will be postponed (which is probably for the best, seeing as it’s basically in a town full of retirees).