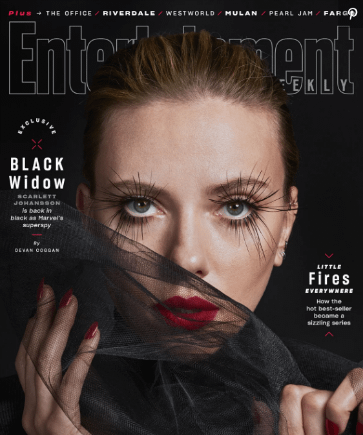 –Scarlett Johansson covers EW to promote Black Widow. She talks about only having met Florence Pugh a few times before they filmed their first scene together (“Immediately we were in each other’s space, like, ‘All right, I’m going to grab your armpit, and you put your hand under my knee in a pretzel'”) and why she didn’t want the movie to just be “like Bourne, but with a woman” (“I hope that this film continues pushing that boundary, so that we can actually have more female superheroes who are inherently female, and aren’t just Batman in heels or whatever”).

-The Hollywood Reporter just released their stars and their stylists issue, which I always adore.

-Wow. Harvey Weinstein just got 23 years in jail, which is close to the maximum possible sentence, if his terms were run consecutively, of 29 years. The judge said “This is your first conviction, but not your first offense.”

-Meanwhile, before sentencing he said in the courtroom “I am totally confused. I think men are confused about these issues. Thousands of men are losing due process. I’m worried about this country.” It’s pretty ballsy to complain about a lack of due process — when you’ve just been afforded it.

–Wendy Williams called out Nicki Minaj for marrying Kenneth Petty, who registered as a sex offender this week following a 1995 conviction for first-degree attempted rape. “You should’ve never married him because now you’ve ruined everything about what your brand could be.”

–Dakota Johnson‘s gives Architectural Digest a peek inside her home and I kind of love it.

-This video of today’s daytime talk shows with no audiences due to covid-19 is very eerie.

–Naomi Campbell showed up to a flight from LA to NYC on Tuesday clad in a full hazmat suit, surgical mask and latex gloves included. Look, I had to self-isolate today due to this damn virus and even I think this is irresponsible and panic-inducing.

-Westworld is trying to make it seem like its truly reinvented itself for season 3, but in the end it seems like it’s just more of the same.

–Jon Bernthal is set to star in an American Gigolo TV reboot at Showtime and wow, do I love that casting!

-Speaking of shows I want in my eyeballs immediately, Scott Foley has been cast to headline a dramedy about the ballet.

–Brad Pitt is coming to HGTV for Celebrity IOU With Drew and Jonathan Scott. Each episode will feature a star getting hands-on with the brothers to imagine a design plan to reward their mentors, friends or family member.

-The Ellen Show got the three Love Is Blind couples together for a game of Never Have I Ever.

–John Krasinski says he and Ryan Reynolds “turned into 14-year-old boys” when they got to meet a surprisingly friendly owl at Reynolds’ daughter’s birthday party.

–Colin Firth and Julie Walters star in a new adaptation of The Secret Garden.